Therefore I Geek Podcast, Episode 86 What is Canon (and Does it Matter)?

In which, Andrew and Tracy welcome Dude back to Therefore I Geek to discuss canon–who decides what canon is, whether canon can change, and in the end, whether canon even matters.  We also cover the most recent trailers that dropped last week, and the unfortunate passing of Steve Dillon.

END_OF_DOCUMENT_TOKEN_TO_BE_REPLACED

Therefore I Geek Podcast Episode 74, Star Trek Beyond and SDCC

In which, Andrew, Tracy, and Dude take on the news from SDCC, especially the trailers for new DC movies and the announcement of Brie Larson’s casting as Captain Marvel.  They wrap up the episode with a conversation about whether or not the new Star Trek Discovery ship lacks the correct cool factor, and whether Chris Pine will ever play a character that is not Chris Pine.

END_OF_DOCUMENT_TOKEN_TO_BE_REPLACED

In which, Tracy has a cold and her voice sounds all husky and amazing.  But actually, we are talking mostly about non-universe comic book movies with lots of long diversions into all kinds of other topics.  We also comment on comic books that should be made into movies. END_OF_DOCUMENT_TOKEN_TO_BE_REPLACED

Guest Blog | Review: Until the End of the World, Preacher Vol. 2

No matter who he is; no matter how far he has come or what he has accomplished; sometimes a man’s past can still haunt him. If he hasn’t dealt with it properly, it can control him in ways he could never have imagined.  Despite having the powers of the Almighty himself, Jesse Custer finds himself face to face with his past and must use every ounce of will power he has to keep from letting it control and ultimately destroy him. 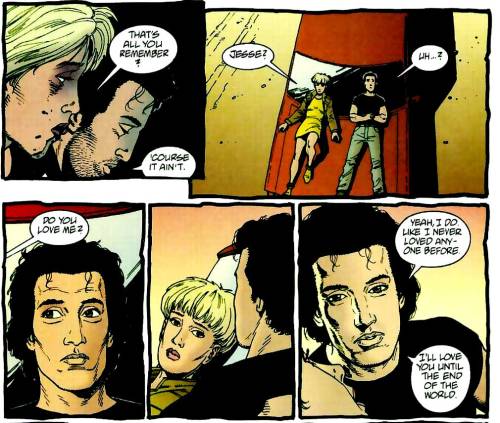