Therefore I Geek Podcast, Episode 86 What is Canon (and Does it Matter)?

In which, Andrew and Tracy welcome Dude back to Therefore I Geek to discuss canon–who decides what canon is, whether canon can change, and in the end, whether canon even matters.  We also cover the most recent trailers that dropped last week, and the unfortunate passing of Steve Dillon.

END_OF_DOCUMENT_TOKEN_TO_BE_REPLACED

The Ebola outbreak in West Africa is one of the more terrifying events of the past year. At this point over 10,000 people have been killed by the virus and it has devastated several countries to the point where it will takes years, if not decades to recover. There is thankfully, a bright spot for those working with the disease. Based on new research, it appears that the virus involved in the current outbreak is not mutating at an accelerated rate as was previously thought. In fact, the virus is mutating at about the same rate as viruses from previous outbreaks. While this is a relief for vaccine researchers, it doesn’t leave them worry-free as even small mutations may have a dramatic impact on the effectiveness of a vaccine.

I’m glad to hear this news. I’ve seen Outbreak, I know this doesn’t end well if it mutates. END_OF_DOCUMENT_TOKEN_TO_BE_REPLACED

About a year ago, I was told I should check out a mobile game called Blood Brothers, which I downloaded and intended to give an honest month’s play to see if it were any good. Almost a year later, I am still playing this game. Like any good mobile app developer, this one advertises their other games on splash screens while loading up, but I paid them little mind (does anyone actually click on those things?) until their latest ad, this one for a game called Final Fantasy: Record Keeper. I was intrigued enough to take a look at all the games this developer has created, and was surprised to see that they carry some pretty big brands. Their impressive list of titles includes Transformers Battle Tactics, Marvel Mighty Heroes, Star Wars Galactic Defense, and the latest Final Fantasy offering from Square-Enix. These names have been known all over the world for decades now, and for one developer to have use of all of these intellectual properties at one time is quite an accomplishment. END_OF_DOCUMENT_TOKEN_TO_BE_REPLACED

On more than one occasion we’ve talked about how great digital comics are and apparently we are not the only ones who think so. Comixology is the (non-game) iPad app with the highest profit for 2013. In the last seven years Comixology has sold 6 billion pages worth of comics, 4 billion of those were sold just in the last year. Assuming an average paper thickness of .1mm, if last year’s sales were physical comics, they would be a stack of paper that reaches from New York City to Washington DC. Thankfully for the trees, these were digital sales.

It is also interesting to note that many people who bought their first comic online have also started buying print comics as well.

Comics Alliance has a great piece about a new series called Nova Phase.  After reading this article, I went ahead and picked up the first two issues on Comixology (both released 1/15) and they were fantastic. It’s a familiar mix of science fiction and westerns much like Firefly, but of course it has little, wonderful touches that makes it feel unique. The art is fun and reminiscent of 8-bit style–though with more than eight colors–and it takes me to a happy place.  As someone who was raised on NES and SNES games, I think this is a well designed bit of retro that doesn’t allow itself to be handicapped by its limitations. 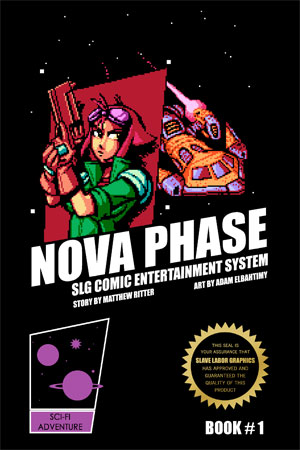 There is a great varient cover that I’d love to get my hands on, so if anyone knows where I might be able to find it, I’d be a very happy man.

It is no secret that Nintendo has been having issues with its Wii U console. One of the biggest reasons for this is the startling lack of third party game support. As it turns out a lot of this lack of support is Nintendo’s own fault.  A senior designer for one of the third party developers discussed many of the problems they encountered which included an underpowered prototype CPU, language barriers and Nintendo’s impressive lack of knowledge and experience with online game play. Designers were forced to jury rig computers to mimic the Wii U’s lackluster processor.  It takes a week or more to find solutions to issues that arise, and these are still more often confusing than helpful.

Not winning any awards as a developer’s best friend.

While I do own a Wii U, I only use it for vintage games and I am unimpressed with the system as a whole. Maybe I was doing something wrong, but I couldn’t even get it to play a DVD.

Finally, A Tolkienist’s Perspective gives us an insightful look at some of Tolkien’s lesser known works. I think we’re all familiar with The Lord of the Rings and The Hobbit but many people don’t know about his shorter stories. Personally, I only knew of one of these works (Farmer Giles of Ham), but now I’m going to be adding the others to my reading list. A Tolkienist’s Perspective provides context for these stories without giving away all of the delightful details that are Tolkien’s trademark.

I’m just glad that The Adventures of Tom Bombadil only contains two poems about Tom Bombadil. I really don’t like Tom.