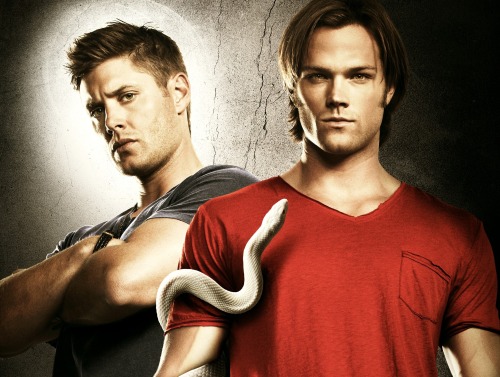 1.)  Every adversary that Sam and Dean Winchester face is supposedly bigger and badder than the last adversary, but actually seems easier to kill.  This whole show started with John Winchester’s lifelong search for Azriel, the yellow-eyed demon who killed his wife.  John has been praised over and over (even posthumously) as being one of the best hunters who ever lived, and yet it took him a lifetime to find this demon and kill it.  These days, his sons discover big baddies and polish them off in the course of twenty episodes or so with relatively little effort.

Once Azriel was done away with, the boys turned their attentions to Lilith, the baddest demon EVER!  Sam did some dumb stuff like drinking demon blood, but in the end, Lilith got hers just like Azriel had.  Then Lucifer and Michael arrived on the scene.  An Archangel and a former Archangel would seem to be the scariest bad guys in town, but the Winchesters manage to hide from them for a ridiculous number of episodes until finally the angel/demon pair are banished to an extra special cage in hell—managing to SPLAT goofy angel sidekick Castiel and take Sam into hell with them (more on that shortly).

One would think that there was no way to top a PAIR OF ARCHANGELS as difficult adversaries, but the show producers were undaunted.  Somehow, the replacement bad guys—vampire daddies and shape-shifting dudes called Leviathan—were evil-er and more difficult to kill than the princes of heaven and hell.

Honestly, this just gets old.  There is no way that “purgatory” is a nastier place than hell—after all, traditionally it is a holding cell for people who aren’t bad enough for hell but not good enough for heaven.  I’m sure purgatory isn’t a pleasant place, but Dean (who has been to heaven AND hell AND purgatory) wants us to believe that it is the nastiest place in existence.

Reason #1 that I will keep vegging out with Supernatural: season one Sam & Dean are swoon worthy.

2.)  My second argument for the poor quality of this ever-present, fantasy soap opera, is the one dimensional, stagnant characters.  There is no depth to Dean or Sam.  Each brother spends a lot of time (a ridiculous amount of time, actually) pouring his heart out to supporting cast members regarding his place in the world and his feelings about his brother, but there is no evidence in their actions to back this up.  There is no progress in their relationship either.  We hear the same old argument every season.  Summed up, this is how it goes:

Reason #2 If you tell anyone that Supernatural made me love this song, I will VEHEMENTLY deny it.

3.)  There are no actual consequences for the Winchester’s actions.  Whether they are committing credit card fraud (and considering how careful credit card companies have become, I doubt the boys could survive on fake credit cards unless the entire show was about Sam and Dean filling out applications) or committing to spending eternity in hell to save mankind, no main character except John Winchester has ever had to actually live with the penalty of his choices.  Here’s a great infographic (only through season seven) of Sam and Dean’s death count.  Keep in mind that this only counts times that they’ve actually died, and does not include near-death-experiences, such as Dean’s heart attack at the hands of the card shark monster in season five, or other “coming back” events, such as Death’s re-souling Sam in season six.

Of course, Sam and Dean aren’t the only characters on the show that have cheated death—Bobby nearly died after a run in with the same card shark that nearly killed Dean, and he’s been back from hell himself.  Castiel has been splattered at least twice, and just keeps popping back up (albeit in various degrees of mental health).  In fact, the characters on this show have come back from the dead so often that they have actually occasionally discussed how abnormal this is.  However, it’s really hard to believe that someday they will have to pay the piper, given their track record.

4.)  Nothing mundane ever happens in the Winchester’s life.  This is actually a phenomenon that is getting worse as the show ages.  The most ordinary thing that the brothers ever do is lean against the Impala, drink a beer, and talk about their feelings.  This was referenced in an episode called “The French Mistake,” which brings me to reason #5.

Reason #4 This may be a dumb scene, but they sure look hot playing it.

5.)  Supernatural is so old that the creators occasionally get bored and make stupid, annoying meta episodes .  The first one that I noticed was “The Monster at the End of this Book,” in which the brothers realize that their entire life is being written down by a guy named Chuck before it happens.  Even more annoying is perpetually appearing, super-fan Becky, who is obsessed with Sam Winchester and inserts herself into the brother’s lives several times—even tricking Sam into marrying her at one point.  These episodes are cringe worthy enough that I have had to get up and leave the room until the majority of the awkwardness had passed.

Reason #5, dorky moments like this are dumb, but make me melt. (Hush, I’m still a girl, after all.)

6.) There are so many random inconsistencies and continuity errors in the show.  The most glaring of these in my opinion is the way that Dean’s attitude toward pop culture has changed.  For the first three or four seasons, Sam or another side character would occasionally reference a song, movie, or other modern cultural icon, and Dean would not understand.  Once Castiel joined the show, however, there was a new foil for pop culture references, and suddenly Dean did a 180, and began making references to The Mentalist, the Huffington Post, and Breaking Bad.  Not only was this completely out of character for him, but I cannot figure out how he has the time to not only know what these things are, but to have intimate knowledge of backgrounds and plotlines.  Isn’t he running all over the Midwest fighting bigger, badder things that go bump?

There are obvious reasons that Supernatural is just bad TV.  It’s overly emotional, it makes very little sense, and the storylines are over-the-top and completely unbelievable.  However, the show does one thing very well—since the audience does not need to think while watching, they can focus on the extremely hot main characters doing manly and attractive things, such as saving humanity on a regular basis.  While it is certainly not something that I brag about, I enjoy a good Supernatural binge after finals or some other stressful event.  (And like most fangirls, I’m not happy unless I’m complaining about the things I enjoy!)

Got a show that you love to hate?  Got more complaints about this show?  Holler at me in the comments!