Today is the launch of Amazing Spider-Man #1 and The Amazing Spider-Man 2 comes out in theaters tomorrow. How fitting, then, that Wired gives us a great article about the physics behind Spidey’s most famous piece of paraphernalia, his webs. Being an engineer, I’m familiar with most of the equations used in the article, but I had never put much thought into what the physical requirements must be for the webs. To pull of some of Spidey’s more impressive feats, the webs would need to be five times stronger than a steel cable. 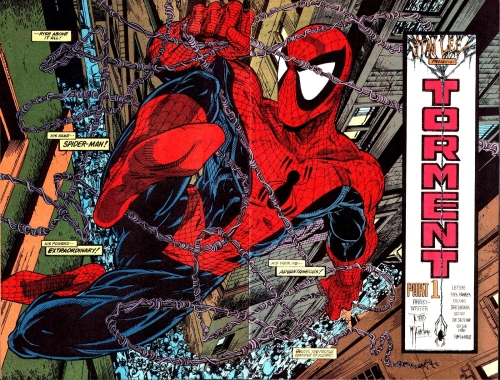 I also really enjoyed the preemptive comment responses. This man has dealt with the internet before.

Observing un-contacted native tribes has always been a tough thing to do. Frequently contact eventually results the destruction of the very culture that is being observed. In an effort to prevent this from happening but still learn about the tribes, researchers are turning to Google Earth to monitor the behavior and activity of some tribes. This form of observation will also help set up buffer regions around the tribes to prevent inadvertent contact.

While this is a pretty great use of technology, it’s also a high tech form of voyeurism. Just a little creepy.

NASA has chosen to honor none other than William Shatner with their highest award, the Distinguished Public Service medal. This is a real no brainer. I’d bet considerable amounts of money that you couldn’t walk twenty feet in a NASA building without finding someone who has been inspired by the adventures of Captain James T. Kirk and his successors. Shatner has also been a vocal supporter of the NASA and of space exploration in general.

William Shatner with Ricardo Montalban in the episode “Space Seed”.

I had no idea he was Canadian. Guess I’m not quite the trekkie I thought I was.  😦

Today we’re talking Emerald City Comicon with Nick and Liz. Fresh from the convention, we dig into the convention experience for two brand new convention attendees. We had a great conversation about everything from planning and expectations to their final thoughts on the convention. After the conversation Andrew takes a few minutes to share convention going tips. Here’s a hint: shoes are a big deal.

Level Up Your Life

If there is one thing that I abhor in literature and in real life, it is inconsistency.  I also despise inefficiency and incompetency, but those usually apply to the workplace more than to the bookshelf.  Still, inconsistency stands out as a peeve that has grown from a cute, cuddly pet—an endearing idiosyncrasy—to an enormous, vehement monster, which is ready to jump out and rant away at any time.  Usually this happens when I am alone in my room, but occasionally bursts out during conversations with people who always like me just a little bit less after the fact.

My friends would have me believe—and in fact I actually did believe for quite a while—that I am alone in these crazy tirades, but I have recently learned that I am not.  Indeed an entire generation of readers now thinks the way that I do, and our prayers have been heard by the gods of our beloved genres:  the Authors themselves. END_OF_DOCUMENT_TOKEN_TO_BE_REPLACED

It’s well known that stormtroopers don’t exactly have the best life. The Imperial military is a tough organization to be a part of and quite honestly, the average life expectancy of a stormtrooper is like five minutes. But if you’re interested in the more intimate details of a stormtrooper’s daily life, we have some insightful pictures that may give you the insight you desire.

It’s nice to see they also have some fun between all of the dying and poorly aimed shots.

Publisher’s Weekly performed a survey of comic retailers and recently published the results. While the survey was relatively small, it did provide some interesting information about the state of the comics industry. Obvious to most people was that comic readers are moving away from the big two and embracing new creator owned content. Most interesting was the fact that female comic readers are on the rise, specifically with digital comics. Whether this increase will transfer to brick and mortar stores is still unclear.

Comics Alliance correctly points out that what we need most is additional research.

With Game of Thrones being the insane hit that it is, it’s hard to remember that at one point it was just an idea in the head of one man.  Rolling Stone recently took the time to sit down and interview George R.R. Martin. The interview is fantastic and provides both Martin’s personal history and the origins of A Song of Ice and Fire. It’s hard to imagine that this epic series all started with the idea that became the opening scenes of the A Game of Thrones,

The interview took nearly ten hours because Martin loves to talk about nearly everything.