They say you can’t go back.  Usually “they” are referring to specific life event:  high school, the first car, or that one sweet summer where everything was perfect.   Gamers can’t go back either.  Once or twice a year a friend or two proposes to hook up that old NES or Genesis console and do some hard core retro gaming to relive the “good old days” when   games were innocent and pure and brand new.  Everyone’s list is different, but there are some games that appear on more lists than others: Battletoads, Bionic Commando, Blaster Master, Final Fantasy, and Super Mario Bros are just a few of these. All were very good games for their time.  I admit that I have attempted to do a little retro-gaming from time to time, but more often than not I end up disappointed and bored after an hour or two into what was supposed to be an all night gaming session. END_OF_DOCUMENT_TOKEN_TO_BE_REPLACED

For today’s mobile game review, I went to the Google Play Store’s holiday sale.  There I found a plethora of games and at that point the hard part was choosing just one.  I found a holiday game called Nun Attack: Run & Gun which looked interesting and had a controversial name—double win, in my opinion.  This is just running game with the gun element added for some fun.

First off, this game is cute and fun.  The graphics are a little edgy, but it works in the setting.  Players get to choose a nun, which is Rosy, a tall, leggy young lady with an eye patch and a semiautomatic rifle, by default at first.  Other nuns can be unlocked later in the game.

The object of the game is to run and gather coins (much like the oh-so-boring Temple Run), but is made more interesting by the addition of skeletons, werewolves, and zombies, which all want a piece of nun.

I wonder how Rosy lost her eye.

The controls are fairly easy, considering the lack of physical buttons to work with.  Up and down buttons on the left allow Rosy to jump or slide to gather coins and avoid spinning skill saw blades and other deadly objects.  The button on the right allows Rosy to fire her rifle at the evil creatures who wish to prevent her holy work.

As with most mobile games, this game relies on in-game purchases for revenue.  Fortunately, it appears that jewels/diamonds are only used for free revivals (pun intended) for the nuns.  Unlike many games where jewels are required for leveling up, it would appear that it is unnecessary to spend money in this game to fully enjoy it.  Most upgrades to weaponry, etc, are purchased with coins, which are earned in gameplay.  That’s a huge plus for someone like me.   It’s also nice that these coins are generously distributed.  From time to time, the nun will run into a portal, which will take her through a strange rip in the space-time continuum which for whatever reason has been filled with coins.

There are a few things that do get in the way of a perfectly smooth playing experience.  The nuns do not seem to have a very long life span.  I would have preferred that my character could survive a few attacks before she fell on her face and literally bit the dust.

Another big problem for me is that just as the nun starts her run, a popup screen listing the available power-ups appears and stays there until it is manually closed.  This requires me to move my hands away from the important buttons at the bottom of the screen, which is very scary. 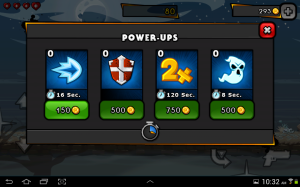 Go away! I’m trying to run.

Lastly, it is both distracting and difficult to find out what the objectives are for each level.  They appear in small black bars at the bottom of the screen during actual gameplay and are not listed anywhere else in the game.  I can either ignore them completely and hope to accidentally achieve them; or I can stare at the bottom of the screen and wait for them to appear, and potentially allow my nun to run into something deadly.

This is really just a run and shoot game—not that the astute player would gather anything different from its name.  I enjoyed playing it, and it gave me a nice chance to take out my anger from my seasonal retail job (Yell at me because you don’t have a coupon for your purchase, will you? Take that, skeletons!!!!).  The game is available in the Google Play Store and in the iTunes App Store.  All things considered, I give it four out of five death stars.