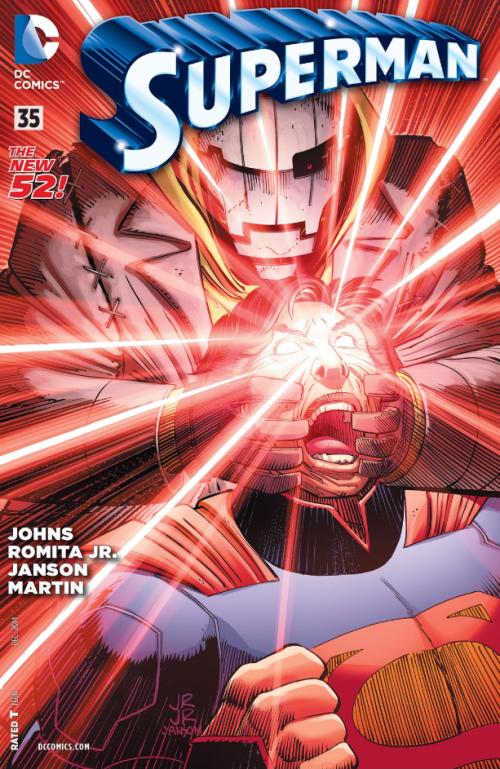 I would like to preface this review by saying that I am not much of a Superman fan. I have nothing against the Man of Steel, but I don’t often find myself being drawn into his stories. However, when I discovered that Superman was being written by Geoff Johns with art by John Romita Jr., I found myself compelled to start reading.

Aside from being one of the more prolific writers in modern comics, Geoff Johns is also one of the best. Quite honestly, for him to get me to care about a Superman book, he really has to be. This is now the fourth issue that Johns and Romita have done and though not the strongest so far, it’s still a solid issue. So far Superman has been introduced to and teamed up with a man who goes by Ulysses, who has powers similar to that of Superman and has a backstory that takes quite a bit from the Superman mythos. While enjoyable, issue 35 has unfortunately hit on several clichés, some that are easily recognizable from Johns’ ten year run on Green Lantern. Though he lacks the same megalomania, Ulysses is beginning to show the same “order through control” mindset that so often characterizes Sinestro. One particular scene has Ulysses asking Superman the age-old question of why he doesn’t just force the people of Earth to be peaceful. Unfortunately Superman doesn’t have much of an answer. What Johns does very well, though, is the dialogue between supporting characters. The back and forth between Lois Lane and Perry White is believable, while the slight jabs and cuts the other reporters take at one another are the kind of thing I would expect in such a competitive field. 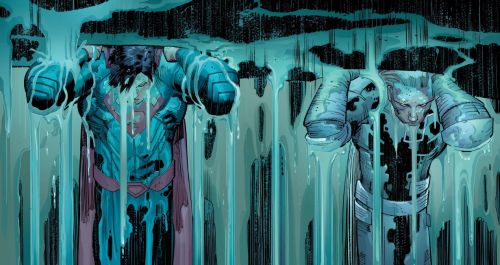 While this may not have been Johns’ strongest issue, Romita Jr. showed no signs of slacking off. It’s no secret that talking heads are not Romita Jr.’s strong suit, but thankfully this issue has plenty of action as well. Romita Jr. also does a great job of conveying the effects of weather and water in general. This issue in particular has an amazing two page spread of Superman and Ulysses lifting a cargo ship out of the water from beneath and the water is just pouring off of them in spectacular fashion. It also demonstrates that while the lift is well within Superman’s abilities, it isn’t an easy matter for him. The effort required is plainly visible on the faces of both men. It is quite obvious that Romita Jr. takes his art cues less from his father, and more from Jack Kirby. There are multiple pages that are filled with Kirby inspired backgrounds and technology.

Although Superman has never been a part of my regular reading list, as long as this team is working on it, I will be checking it out. I’m excited to see where the story will go next. 3.5/5 Death Stars.

This podcast will be discussing plot points which may be considered spoilers. Consider yourselves warned.

In which, Andrew and Tracy are joined by Santana Perez and Anthony Mazzola to talk about the hottest new releases this summer.  Our heroes cover everything from the Marvel summer event, Original Sin, to the latest Image comics, such as Mark Millar’s MPH, as well as writing styles, complex characters, and favorite art.  Santana and Mazz say funny things, and Tracy laughs a lot.

END_OF_DOCUMENT_TOKEN_TO_BE_REPLACED 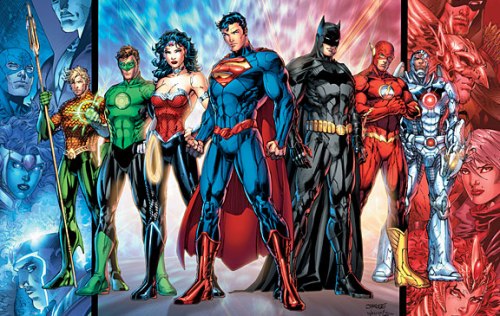 Welcome to Week 1 of the New 52 in Review.  I’d like to thank DC for making my life a bit easier this week by only releasing one book. I’m amazed at their foresight, to know that I’d be writing this post two years later.  In these past two years Justice League is still going strong.  Initially set five years prior to the current day (that would make it 2006), this incarnation of Justice League started off by focusing on the point when the League was first founded and none of the heroes knew each other.  Aside from the obvious costume changes that accompanied the reboot, DC made a change in the roster as well by adding Cyborg as a founding member of the Justice League.

After focusing on the origin of the League in the first arc and jumping ahead to current day for the second arc, the third storyline saw crossover with Aquaman called Throne of Atlantis.  This story was reasonably well received, although generally considered a remake of an older story line. Currently Justice League is involved with DC’s first event comic since the start of the New 52, Trinity War.

There is way too much going on here.

Under the skillful guidance of Geoff Johns, Justice League has been a strong and consistent book. With many books suffering from editorial mandates and interference, Justice League has managed to maintain a considerably high level of quality. Art by Jim Lee (#1-12) and Ivan Reis (#13-current) has been solid.  Of all the “old school” artists involved with the New 52, Jim Lee appears to have been the most successful, and his performance on Justice League is definitely a contributing factor to its success.