Nearly everyone who played PC games of any kind in the 1990s and early 2000s has played one of the iterations of SimCity.  My first introduction to the game was SimCity 3000, and I spent many happy hours creating multiple cities.  I learned pretty quickly that the key to “winning” that game was just to scrape by, barely making ends meet, until the city was old and populated enough to get a multiplex mall.  After that, the whole thing was a piece of cake. 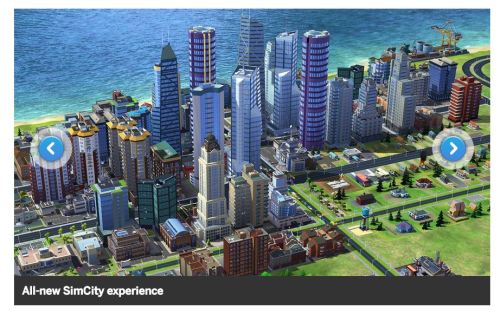 Now, EA Games has paired up with Track Twenty to create a mobile version of the game for both IOS and Android devices.  The promo picture reminded me a lot of the promos from the Sim games of my childhood (I was addicted to The Sims as well), so I was pretty excited to try this game out.

First of all, it’s important to note that there are inherent differences between the platforms for mobile games and PC games.  Mobile games are usually a little more intimate and have larger, touch optimized menus and other game options.  With that being said, however, I have been regularly disappointed to find that many mobile games are just copies of a very few basic templates that get old pretty quickly.  SimCity Buildit doesn’t completely avoid this trap.

This is a resource-gathering, world building game, meaning that it relies primarily on creating items (in this city-themed game, those are made in factories and small stores) to upgrade and to make money.  Unlike in the original SimCity games, residential zoning is free, and upgrading buildings on those zones makes money for the player to spend on other services for their Sim population.  There are no commercial or industrial zones–the player can just plop factories and stores wherever they see fit.  On the plus side, the more services that the player builds, the more likely their upgraded residential buildings will go from standard, to premium, or even to luxury homes. 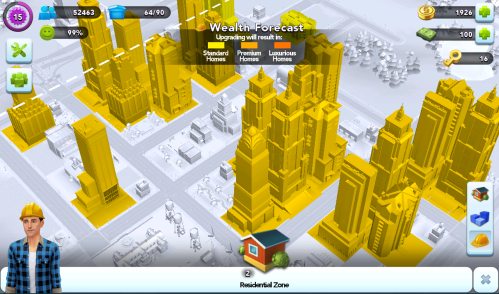 These homes are mostly premium buildings, but this map lets me know how land value will affect the type of building they will be if I upgrade them.

I’ve been playing the game for about two and a half weeks, and at a pretty relaxed pace.  When the homes I build aren’t as luxurious as I want (or if they all look the same–I like diversity in my city), I have no qualms about bulldozing them and starting over.  This is made very easy in the game, since I get two undeveloped resident zones at any time.  As soon as I use the resources necessary to upgrade the residential zone, I get another one to put down.  This also makes it pretty easy to grow the population and advance levels.

Unfortunately, there are some downsides to this game.  First, the game is based on a pretty standard mobile game model.  I understand that there are some limitations to the platform, but that doesn’t mean that innovation isn’t possible–especially from a brand with the power, proven production value, and–let’s face it–the cash flow of EA Games.  Because there is little to do besides gather resources and upgrade residential zones (at least until the population of the city reaches 90,000, when the option for disaster scenarios becomes available), the game quickly can become boring. 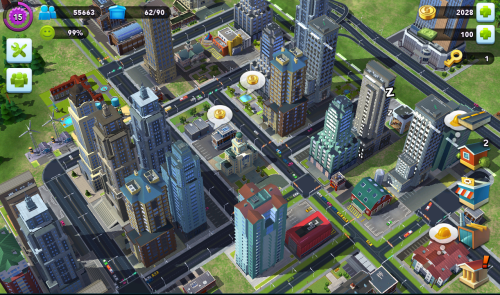 City population, player level, and percentage of happy citizens is in the top left corner, building menus and currency levels are on the right.

Secondly, and this is rarely a complaint I have about any game, it takes far too little effort to advance levels.  At level fourteen, I upgraded about eight homes before being bumped up to level fifteen.  This would not be a problem, except that most levels open up new services for the Sims to demand.  There simply isn’t enough time to save enough money (since the primary source of income is upgrading residents) to provide, for instance, fire stations before the player levels up and is required to install police stations everywhere.  The proportion of XP to cost of these installations is not quite right, and should be revisited.  The game was released on December 14, so it is reasonable to assume that the game will get quite a few tweaks to get things like that just right.

Overall, this is one of the better mobile games I’ve played, and I would recommend it.  There are a few minor bugs, but it is a good time killer, and one that is reasonably easy to put down when life gets busy, and pick up again in slow moments.  Four out of five Death Stars.