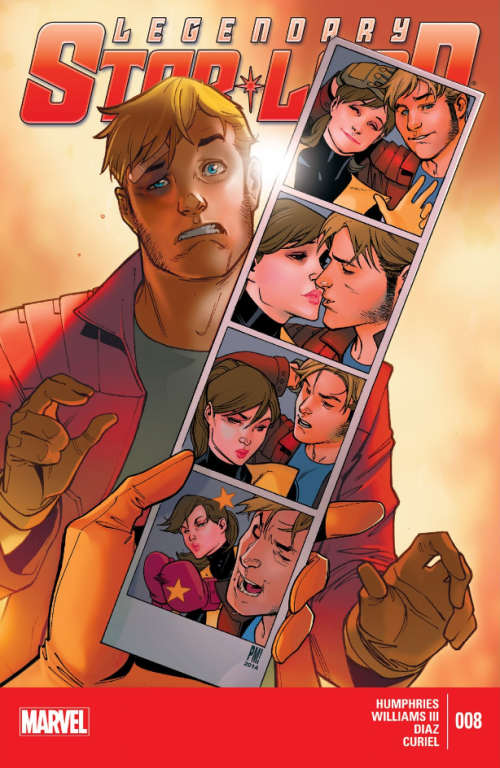 Since the release of Guardians of the Galaxy, Marvel has been trying to capitalize on its success by releasing several new comic titles that feature Guardians characters. Unlike the very popular Rocket Raccoon, The Legendary Star-Lord has received a far cooler reception and has been middle of the road quality at best. Having said that, I think that issue #8 takes a different tack than previous issues and it pays off.

Now, I love a good action packed comic as much as the next guy, but there are times when it’s also nice to have a good character driven story. This issue, more than its predecessors, finds the sweet spot between providing a lot of great character time, interspersed with some action that helps drive the larger plot. Through most of this issue, writer Sam Humphries does a great job of showing the awkwardness of early relationships and first fights as Star-Lord and Kitty Pryde are finally reunited in space. I know that not everyone is a fan of this relationship, but I’m all for it. I really like Kitty and I think it’s a nice way for her to take a break from her otherwise serious life. Kitty has taken on tons of responsibility the last couple years, which has definitely makes her more straight-laced and less the fun-loving character that she used to be. It’s also nice for Star-Lord because he has the exact opposite problem and Kitty balances him out. Humphries also gives us a look into what Star-Lord really cares about when he and Kitty show up at an orphanage that Star-Lord is funding with his life of crime. Between that realization and watching him interact with the kids, Kitty develops a new respect and understanding of why Star-Lord does what he does.

The inclusion of Thane in this issue was an interesting choice. While I get that this, and several other titles are leading into The Black Vortex event, I’m not quite sure how he fits in to it all. The last time I saw Thane was at the end of Infinity and he was very uncertain about his place in the universe. Now he is back and leading a religion of sorts (less like a cultist and more like an evangelical preacher), passionate and extremely compassionate about those he considers his flock–a better portrayal of his character. I also appreciated on an intellectual level the ways in which Mister Knife (aka Star-Lord’s dad and former emperor of the Spartax Empire) manipulates Thane, who is obviously still trying to find his way and differentiate himself from his father, Thanos. 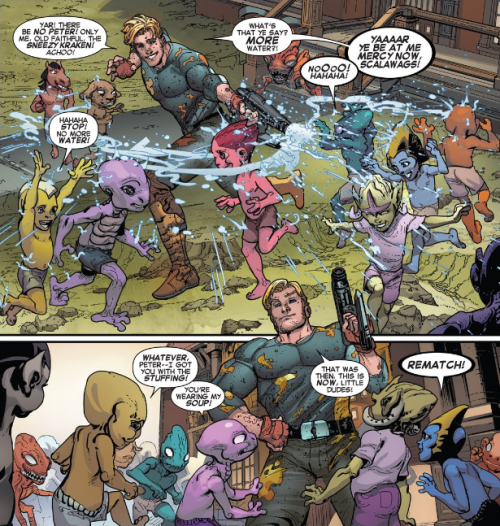 Complimenting this story was some very pleasing art by Freddie Williams and Paco Diaz. Overall, I was very pleased with the art in this book. While the storytelling during the action sequences lost its linear progression, that mattered very little, since most of the book contained either talking heads or single panels of action. Two of those action panels that really stand out are the food fight and when Star-Lord uses his element gun like a garden hose to play with the kids. Both are single panels, but they evoke a mental image of so much more. Almost everyone knows what it was like to be a kid and run through the sprinklers, so the artists play off of that common experience and let the reader’s memories do the rest. Williams and Diaz also do a wonderful Lockheed, Kitty’s purple dragon friend. The artists use Lockheed as a mirror of what Kitty is feeling, and given how long the characters have been together, it really works. Most pet owners can attest that often their pet will take its cues from them and be in a similar mood. While Lockheed isn’t actually a pet, the effect still works on the comic page. 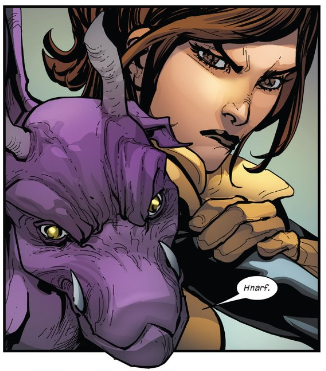 Out of the whole book, there were two very minor things that I didn’t like. First is that there is something about the way Thane looked that seemed off. Not that he looked bad, but I think he looks a little too much like Thanos. I understand that Thane is the son of Thanos, but I don’t remember him looking that much like his father. The second thing is that at the very end of the issue, Kitty says a few things that felt out of character. While I like the fact that Kitty is being more fun-loving and adventurous, I felt that she didn’t seem like herself. I don’t want to say any more so as not to give away the whole end, but sufficed to say that by the end of the issue, the pendulum swung a bit too far.

With Legendary Star-Lord going into the Black Vortex event shortly, I’m not overly optimistic that this book will continue to provide character moments like this, but I’m open to being wrong and I’ll keep reading in the hopes that I am. 4.5/5 Death Stars