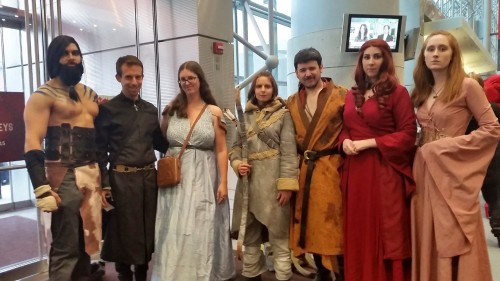 I mentioned that Beth made my Margaery dress, but I didn’t mention that she and her husband Chris made every piece for seven people to cosplay as Game of Thrones characters. In the past couple of years, they have learned dozens of new skills between the two of them. It’s because of their teamwork, craftsmanship, and attention to detail that we three were the winners of best group cosplay at Tidewater Comicon last October as Margaery, Asha (not pictured above), and Oberyn. When you start cosplaying, you meet new people with incredible talents, or you drag some friends and family in with you and discover that they have skills you didn’t know about – and they might not have been aware of, either!

It’s for everyone and anyone.

Before I started cosplaying, I pictured it as something primarily done by 20-something females. But then I met a Daenerys Targaryen pushing her infant dragon in a stroller. I saw a man around my dad’s age cosplaying Bob Belcher. I’ve seen an elderly man as Professor Farnsworth, and a ten-year-old girl as Starfire. There was a couple dressed as Ash and Misty with a toddler Pikachu. It can be an individual hobby or something you do with a group of friends or your significant other. 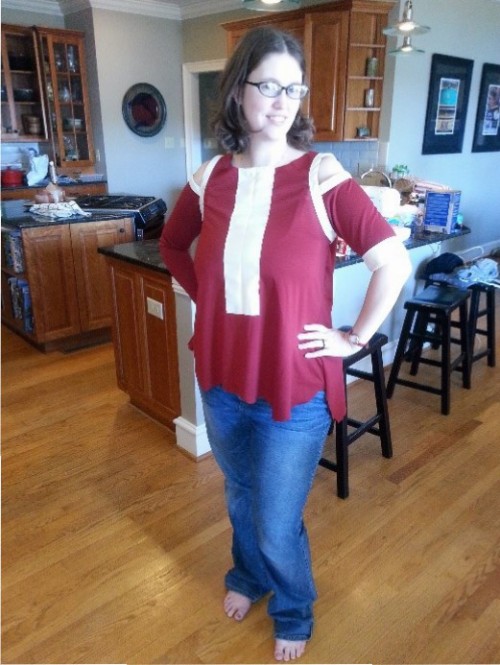 Me, modeling our latest work-in-progress

Like I said before, I’m no expert. But I do have some advice that I’ve either picked up along the way or sorted out on my own that will come in handy for anyone looking to delve into cosplay.

There are social “rules” to cosplay that I wasn’t aware of until my first convention. Signs posted at NYCC declared “Cosplay is not consent.” Beyond the should-be-obvious rule of “don’t grope strangers,” whether you cosplay yourself or just enjoy cosplay by others, you should also always ask before taking a photo of a cosplayer. We want to showcase our work properly, not get caught in an unflattering candid shot eating a sandwich. Leering is also unacceptable; just because a beautiful girl is dressed as Cammy from Street Fighter, doesn’t mean she’s there for you to drool over or be rude to. If you just ask nicely, cosplayers are usually happy to pose with you or tell you about their work. (Of course, that doesn’t mean that they’re required to do so.)

This ties in with etiquette, but should be addressed separately. Many cosplayers have horror stories about being assaulted or harassed. Fortunately, I haven’t experienced this myself. I attribute this to four factors:

If someone makes you feel uncomfortable or outright assaults you, your fellow cosplayers will have your back, providing strength in numbers, serving as witnesses, and getting convention officials involved if necessary. There’s an unspoken camaraderie between cosplayers that makes me feel really comfortable.

This hobby can get expensive, and you need to keep that in check. The materials can be really pricey (thermoplastics, fabric and leather, wigs, accessories) and they add up quickly, especially if you make a big mistake and have to start over on a piece. There are lots of resources online with suggestions on how to lower cost without sacrificing quality by using different techniques and materials, and making informed decisions.

This might be the biggest point of contention plaguing the cosplay community, and I can’t promise everyone will be nice to you about your choices. It is my firm belief, based on the amazing cosplaying I’ve seen both in person and online, that your cosplay is your own. There are no rules saying you have to be canon.

One of my favorite pieces is a Renaissance-style Harley Quinn dress. Clearly she isn’t canon, but she’s beautiful, the pieces are well-made, and it works for her. You don’t have to be the same size, shape, age, race or gender as your chosen character. There is absolutely no reason you can’t be a plus-size Jaina Proudmoore, or Batman in a wheelchair, or a Korean Princess Leia. My Ramona Flowers wore glasses because I can’t wear contacts, and the creator of Scott Pilgrim didn’t seem offended by it, so I don’t see why anyone else ought to be.

That said, if you don’t want to have to fight that fight, you don’t have to. There are enough characters in geekdom that you can always find one you’ll fit without having to take off your glasses, cover your tattoos, dye your hair or wear a wig, or make any other changes you don’t want to. But don’t ever tell yourself you can’t cosplay as a beloved character because you’re too big or too small or too disabled or too dark or too pale or too anything. You can be whoever you want to be, because that’s the entire point of cosplay.