It’s been one full week since San Diego Comic-con, the mother of all comic book conventions, and in the middle of all the wonderful stories of sneak peeks, exclusive merchandise, and chance encounters with geeky celebrities was a very sad story about a young cosplayer who was found with severe injuries immediately after the con.  While it turned out that her injuries were actually the result of a fall, and not the assault that was considered a possibility when the news first broke, the one thing that stood out for me in all of the uproar was a phrase by a comic-con message board user, “I saw her early in the day and she looked really happy and upbeat, but I then saw her around 3 or 4 pm around the convention center and she was covering herself up and looked stressed.”

A community organization to help stamp out harassment at conventions.

I know that the cosplay and convention community has begun to realize that assault or at least harassment is something that happens far more often than is reported.  However, I truly think that it is unacceptable that cosplayers (female or male) would feel uncomfortable in a setting designed to cater to geeks and allow them to associate with others who share their passion.

Over the weekend, I mentioned the SDCC incident to my friend Misty, who cosplays quite a bit, and she instantly responded, “Oh yes, it’s definitely a problem.  I’ve had several men ask to take photos with me and then grope me or put their hand in inappropriate places.”  I was horrified.  While I can never say that I expect crude behavior, I was not particularly shocked to have a passing young man at a Li’l Wayne concert “accidentally” cup my backside—and then apologize insincerely when I whipped around and snapped at him.  To have cosplayers in fear of other geeks feels wrong on so many levels.

To be clear, I am not attacking male geeks, or males in general here.  I rarely see harassment of cosplayers at the conventions I’ve attended, and I think that is a testament to the respect that most geeks have for each other, but that doesn’t meant that harassment doesn’t occur.  I would urge other geeks who attend to be aware of harassment happening to others and to speak up if something seems wrong, or if a fellow attendee seems uncomfortable. 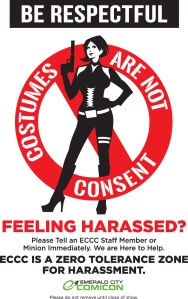 I greatly appreciate Emerald City Comic Con’s response to the possibility of harassment with a zero tolerance policy that was very clearly stated.  Not only was it announced on their website, Tumblr, and in their program guide in no uncertain terms, but it was also posted all over the conference center.  This is the type of response I would like to see at all conventions.  Cosplay, after all, is not consent.

If conventions create a zero tolerance policy and uphold it, then I feel that other comic con attendees will feel more empowered to speak up when they see uncomfortable or harassing situations, and we can work together to make sure this type of thing is eliminated.  An encouraging sentiment from another message board user gives me hope, “Lets help this family out. Come on guys she’s one of our own. Plz come forward with any information.”  We as geeks are one community, and harassment of one is harassment of all.  The less tolerant we are of this behavior, the stronger we are as a group.

4 responses to “Editorial | Victims of Cosplay”