In which, Andrew, Tracy, and Dude unpack the recent weapons policy that Baltimore Comic Con posted and quickly amended, as well as DC’s new movie Suicide Squad.  Andrew and Dude found very little to enjoy about the movie, while Tracy felt it was a good time–if not a classic to span the ages.  Notable quote: “[Captain Boomerang] wasn’t just normal-guy creepy, he was candy-and-windowless-van creepy.”

END_OF_DOCUMENT_TOKEN_TO_BE_REPLACED

Seriously, who doesn’t love the original Robocop? It is one of the best examples of 1980’s action movies. It had over-the-top violence, a nearly comical amount of gore, catchy one-liners, and the acting skills of Peter Weller. When I heard they were remaking Robocop, my feelings were mixed. While I was excited about seeing the movie storyline enhanced with modern effects, I’ve seen so many movie remakes that fall short that I couldn’t help but be apprehensive. Now that I’ve seen it I realize my apprehension was misguided, though this does not mean the movie is perfect. I certainly enjoyed myself, but there were more than a few chinks in the armor.

Much like the original, this Robocop tells the story of Detroit police officer Alex Murphy (Joel Kinnaman) who is nearly killed by the city’s criminal element. After his accident–in this case a car bomb–his organic parts are salvaged and implanted into a robotic body, making him the world’s first cyborg cop. As a single minded, crime fighting cyborg, Murphy’s arrest numbers go through the roof, and he almost single handedly reduces Detroit’s crime rate by an astounding percentage.  Eventually Robocop becomes wrapped up in the events surrounding his own attempted murder, and the deeper he digs the more corruption he uncovers.  By the end of the movie, our hero is forced to confront Raymond Sellars (Michael Keaton) the CEO of Omnicorp, the company that helped rebuild him.

Although a lot of the specifics have changed, the overall plot of the new Robocop is the same as that of the original film. To be honest, I liked most of the changes. Most notable was the fact that Murphy doesn’t actually die.  Although he is gravely wounded, he remains alive after his accident and is only placed in the cyborg creation program after his wife signs a release form. This leads into another major change, the role of his family. In the original, Murphy’s family moves on because he has been declared dead and nothing of the man is supposed to remain. In the reboot, Murphy is chosen specifically because of his humanity, and his emotional stability and his family play a considerably expanded role in his post-rebuild life. There is also much more interaction between Robocop and the doctor in charge of the program, Dr. Dennett Norton (Gary Oldman). Dr. Norton helps guide the newly minted cyborg through his first and most difficult days, as well as playing a significant part in the movie’s conclusion.

For the reboot of a well-loved, but not particularly intelligent action movie, this thing is packed with stars putting on amazing performances. Gary Oldman is incredible in his role as Dr. Norton. In the past I have severely underestimated his ability to take on a character and make it different from every other character he has played, but no longer.  Oldman’s Norton is both a friend and a father figure to Robocop, helping guide him through his “rebirth” and then aiding him in his final quest for justice.

I’d also forgotten just how much I enjoy seeing Michael Keaton on screen. Sure he is great as Batman, but I think he really excels in roles where he gets to be a little slimy and gross, like Beetlejuice or Much Ado About Nothing. While his character may appear clean cut and aboveboard from the outside, Keaton is able to convey a sense of the filth that lurks just beneath the surface of these characters.

Even some of the actors in more minor roles, such as John Paul Ruttan who plays Murphy’s son David, are very talented. So often child actors seem very wooden on screen due to their inexperience as actors and their overall lack of life experiences to draw from.  Ruttan on the other hand showed himself capable of being very expressive, even when it comes to more complex emotions. With the near inevitability of a sequel, one can only hope Ruttan is among the cast again.

While I will say that Kinnaman’s pre-transformation Alex Murphy was leaps and bounds beyond Peter Weller’s portrayal, his post-transformation acting was not much better. Both actors played the character extremely stiffly and emotionlessly and it becomes a bit annoying after a while. Robocop also seems to suffer from the same problem as Batman, in that he cannot turn his head, so he has to turn his entire torso. Unlike Batman, the cyborg seems unable to find a fix for the problem.  For a movie called Robocop, Robocop’s performance paled in comparison to the rest of the cast.

Overall I was pleased, though not overjoyed, with the look of Robocop. Robocop himself looked pretty darn good. While certainly not sleek, the new look is significantly more streamlined than the original. He was also better and more realistically equipped. I am pleased with the fact that the progression from the completely robotic EM-208’s to Robocop is very clear. They are obviously based on the same hardware; Robocop just has some gooey parts as well. My favorite change to the character came with the addition of the motorcycle. I’m not sure why, but this now seems like such a natural method of transportation for Robocop. 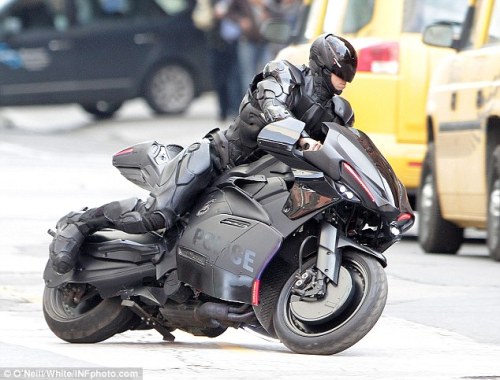 The CGI effects looked pretty good in my opinion. Often when a movie is set in an actual city in the near future, it just doesn’t look quite right—especially when they do the near mandatory skyline shot. In this film I really didn’t notice any of those issues. I feel the film makers did a good job making the viewer believe that Detroit was so far gone that citizens were not safe even in the good parts of town.

While there was a lot to like in the visual department, it’s also where the most painful parts of the movie come from. There is an abundance of shaky-cam in this movie and it was particularly obnoxious. I can’t stand shaky-cam, but I’ve come to expect it from American action films.  I’ve learned to deal with it enough that I can still enjoy a movie despite the fact that the camera man shakes like he’s in the middle of an earthquake. Robocop had not one, but two major action sequences that were so unsteady that I had to stop watching them for a couple seconds because they were making me physically uncomfortable. One was so jarring that I still have no earthly idea what happened during the scene because my eyes wouldn’t focus.

What would a remake/reboot be without little homages to the original sprinkled through-out?  While this can often be overused, Robocop hit the sweet spot. There were many lines like “I’d buy that for a dollar” and “Dead or alive, you’re coming with me” that were lifted from the original and put in the reboot, but done in such a manner that you wouldn’t know where they were from, unless you were familiar with the original.  Of course, I would be remiss if I didn’t mention the classic ED-209.  Originally a competitor program to Robocop, the ED-209 were basically big dumb animals, which was underscored by the various animal noises they made. This time around ED-209 was like the bigger brother to the EM-208 and they weren’t in any kind of design completion against Robocop. Despite the fact that they were much better done this time around, I couldn’t help but laugh every time I saw them on screen.

Every time these guys were on screen I couldn’t stop laughing.

Overall Robocop was a fair reboot and a respectable addition to the existing film franchise. As I’ve said, I fully expect there to be a sequel, so hopefully they can take their current success and build on it, fixing those issues that are most egregious. I give it 3.5 Death Stars.