There’s been quite a bit of controversy over George R. R. Martin lately.  From what I gather, fans of A Song of Ice and Fire have gone past the normal concern over the wait for The Winds of Winter, the next book in the series, and are making personal comments about the man’s weight, his seeming lack of motivation, and his dedication to his fans.  Apparently, some are even getting very angry about the possibility that Martin may never finish the next installment.   I’m saying “apparently,” because, while I’ve seen considerable speculation about these things, I’ve never seen blatant anger toward the author, nor anyone actually abusing him.  However, with the amount of “counter-backlash” that is circling the internet these days to defend Martin against these possible aggressors, surely some of this does exist.

The first defense of Martin came in 2009 from the pen of one of the most revered sci-fi writers of our time, Neil Gaiman, author of Sandman and American Gods.  “George R. R. Martin is not your bitch,” he told fans (who at the time were waiting for the most recently published Song of Ice and Fire book, A Dance with Dragons) bluntly, and, because I respect the opinion of such an intelligent man, I continued reading.  His point was that authors are not machines and cannot always deliver on what has been promised.  He pointed out that GRRM’s LiveJournal updates are probably not competing with his actual authoring time.  I agreed with this assessment, as I would never compare writing a blog post (and I have written many) with writing a novel.  Then Gaiman pointed out that for the first time in twenty five years he himself was unable to produce a promised piece of work, shortly after his father’s death.  I don’t know of any deeply troubling emotional events that have happened to Martin recently, but I am not personally acquainted with either Gaiman or him, much less a close confidant, so I was content to accept this explanation from another author who presumably understood the pressures and possibilities of the job.

Since 2009, of course, the A Song of Ice and Fire fan base has become enormous, thanks to HBO’s Game of Thrones TV series.  George R. R. Martin has taken breaks from writing his next book to negotiate the contract, write and direct episodes, serve as an expert consultant to the series’ creators, and take numerous trips to filming locations, not to mention myriad journalist interviews and travelling to a ridiculous number of fan events.  I do understand that it is easy to get caught up in fame, but it seems that Martin has forgotten that his original work is not yet complete.  I know a little bit about being a procrastinator, as any of my friends and most of my professors could tell you.  I know that when I am browsing Reddit, I am not writing the editorial that is due to be posted on Monday.  Two things cannot be done at the same time.  I’m a slow writer, and if I get distracted from a scholarly paper, it may take days or even weeks longer than planned to finish.

There were world wide webbers to weigh in on this, too, of course.  I watched a video from comicbookgirl19 called “PSA: I’m Sorry, George RR Martin” that I honestly thought was farce for the first three minutes out of 3:42.  “Every single day, the author of Game of Thrones is being pressured from what seems like the entire world to speed up his writing… Fans need to realize that he does not write merely to entertain you,” she says right off the bat.  “He isn’t even obligated to finish the series if he doesn’t want to… He didn’t start writing this to end up on a best seller list, or to amass millions of fans.”  Well, Random House may have something to say about whether Martin finishes the series, since he’s under contract for seven books, but more importantly, I’m pretty sure that the entire reason that an author sells his work is to entertain others.  If Martin didn’t want fans, his manuscripts would still be sitting in a pile somewhere in his own home, gathering dust.

“Did you know that the pressure to finish his next book, The Winds of Winter, was so ridiculous that he was forced to shelve doing a cameo on his own show?  Oh my god, that is a total crime!  He can’t even have a little bit of fun because he’s been made to feel like an entertainment slave?”  In the past month alone, GRRM has been to four conventions or fan events—one in California, one in Scotland, and two in England.  In late 2012, Martin decided to invest in and reopen the Jean Cocteau Cinema in Santa Fe.  Despite promises to fans that he wouldn’t let the theater project interfere with his writing schedule, he was the man tearing tickets at the grand opening.  It definitely seems like the author is enjoying his fame and fortune, Game of Thrones forgone cameo notwithstanding.  The man certainly does not appear to be hurting for fun. 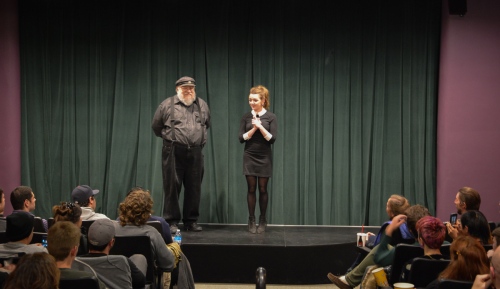 Ultimately, however, my decision to be done with the author once and for all came after a video appearance for the Swiss paper Tages-Anzeiger just a couple of weeks ago.  Before the interviewer could even get out a full sentence, the author cut him off with an annoyed snarl, “I find that question pretty offensive, frankly, when people start speculating about my death and my health, so fuck you to those people.”  To make sure his point was abundantly clear, he then flipped off the fans.  It must be nice to be so rich and famous that an author feels comfortable flipping off the people who are paying him to live.

Worried that he won’t finish his most famous series? Martin has something for you.

Since that interview, Martin has gone on record again to say, “I can only write one word at a time, one sentence at a time, one book at a time.  I’m writing the books as fast as I can write the books and the show is moving along – we’ll see what happens, but it’s almost out of my hands so I can’t worry about it.”  At the same time, a book of short stories (with an incredibly impressive list of contributors, including GRRM himself) that he edited was just released this summer, and another book by him, The Ice Dragon, will be available in October.  I want to believe him–seriously, I want to–but his track record directly opposes his sentiments in this interview.  As a fan, I dislike waiting for the next installment of a series I enjoy, but I hate being lied to even more.  It shows a lack of respect for his fans that is, quite frankly, insulting.

Brent Weeks, author of the Night Angel trilogy, responded to Gaiman’s ’09 defense of Martin with a beautifully written opinion from another perspective–that of an author who’s profits actually are damaged when a big-name writer fails his readers:

“Part of what entices us to buy a book is the promise conveyed… [w]hether through the title, or interviews, or through a note to readers at the end of a book that says the next book will be out in a year, when an author makes that kind of commitment, maybe technically there’s no contract, but there is an obligation….  And do you know who’s hurt when that obligation is broken? Not the multimillionaire authors, but the mid-listers who are in the middle of a series, barely making it, who hear readers say, ‘I don’t start a series anymore until all the books are finished. I’ve been burned too many times…’  We can fail to fulfill our obligations for many good reasons. However, when we do, it behooves us to apologize, not to pretend that readers are the ones acting entitled.”

Here’s the thing for me:  George R. R. Martin is not my friend.  All he is to me is a man who writes a series of books that I enjoy.  If at any time he stops writing, he no longer has any particular value to me.  I do not believe that he has the right to tell fans that they aren’t entitled to speculate on whether or not they should continue to hope that he will be physically capable of finishing a series into which they’ve invested hours of reading time, and yet at the same time feel entitled to tell them to fuck themselves.

Fortunately for me, the thing that has frustrated many fans about George R. R. Martin has now also made him irrelevant.  He has run out of time, and someone else has taken over the story-telling.  HBO’s show is nearly out of source material at this point and has already asked Martin how the series is supposed to end so that they can continue filming the series without books to pull from.  At this point, I just want to know how the series ends, so I’ll be leaving Martin to his own devices, ignoring his detractors and apologists, and turning to other authors who still care about the people who made them famous.  As Weeks says at the end of his article, “At the end of the day, we have the best job in the world. How about some gratitude?”

So long, GRRM, and thanks for all the fish.

Tagged as A Dance with Dragons, A Song of Ice and Fire, ASOIAF, Brent Weeks, Editorial, Game of Thrones, George R.R. Martin, GoT, HBO, Neil Gaiman, The Winds of Winter