Typically in my editorials, I try to write about geeky things from an academic perspective.  Today I say, “Forget all that!”  I just want to talk about the AMAZING Game of Thrones finale from last night.  I know that emotions were at peak level before the show and that many areas of the internet are suffering from a meltdown after, so this is a great time to discuss the show and what I liked and disliked.  Feel free to join the conversation in the comments, or on Facebook or Twitter.  (I know that not everyone has gotten to see the show yet, so I’m gonna just drop a page break in here to keep anyone from accidentally being spoiled.) 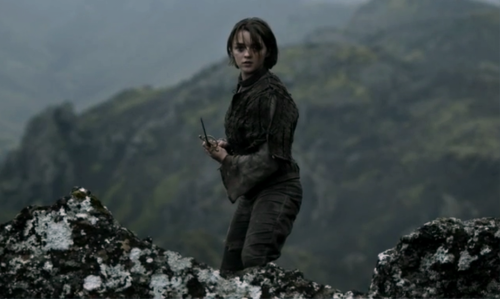 So let me just say that I am a book reader.  I read A Song of Ice and Fire last year for the first time, and while I really enjoyed it, my reading was punctuated by random, frustrated text messages to multiple friends with content such as:

So needless to say, I am not the reader who demands that the show align perfectly with the books.  In fact, quite often I have enjoyed the deviations.  Last night’s episode—the finale of the season—was no exception.  I was super hyped before the show, and I was practicing Lamaze breathing techniques throughout and after it.

#1) Ygritte is finally dead and gone.  Hooray!!  I hated her character in the books.  She was a brat, a nag, and basically a rapist in the books.  Even though Jon made no secret of the fact that he was a virgin, she climbed into his bed and demanded that he have sex with her.  Yuck.  Also, “You know nothing, Jon Snow,” has got to be the most annoying line ever written.  I would like to see how she would handle being dropped in the middle of Kings Landing.  Anyway, I did NOT tear up when her body burned.  Good riddance.

#2) Stannis is finally at the Wall!!!  There are some fantastic storylines about to happen and I am SO pumped.  While I don’t love Stannis the Mannis, I do think that he makes for some fantastic story telling.  He and Jon are going to have quite a power struggle in upcoming episodes, I have no doubt.

#3)  Since Stannis is at the Wall, so is Melisandre.  Looks like Jon just traded one red head for another.  She was practically licking her lips during that exchanged glance at the funeral pyre of the dead Black Brothers. 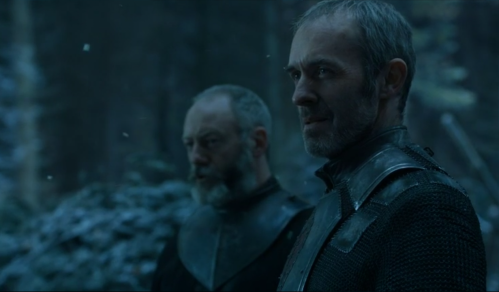 #4)  Brienne and the Hound totally had the dirtiest fight of all time!  This was so fun.  What with the deaths of Grenn and Pip, among others, readers are realizing that even characters that are safe from GRRM (so far) are not necessarily safe on the show.  I was gasping over and over during the whole fight.  Did this happen in the books?  No.  Is that ok with me? YES!!

#5) Tyrion actually strangled Shae and shot his father with a crossbow.  I have been looking forward to this scene for two seasons, and I really think that Game of Thrones did it up right.  With the changed Shae storyline, I was afraid that Tyrion would not kill her after all.  I can only imagine how infuriating it was for Tyrion to hear her call Tywin by the pet name she used to call him.  I also think that it was a pleasant nod to book fans that the camera panned in on the Hand of the King’s brooch next to the bed.  In the books, of course, the Hand wore a chain of golden, interlocking hands instead, and this was the chain Shae was wearing that Tyrion used to strangle her.

I thoroughly enjoyed Peter Dinklage and Charles Dance’s last interaction as well.  I don’t think that the Tysha storyline was necessary here, and was not particularly worried that it was left out of the show.  While book-Tyrion was still somewhat in love with his first wife, that has not been apparent in the show.  I don’t think that it is necessary for Tyrion to spend the next couple of seasons mumbling, “Where do whores go,” to himself.  He has enough on his plate.

#6) The moment in which Danaerys realizes that Drogon, the black dragon, is not a pet was priceless.  She has been so stuck up and such a brat for sooo long, that it was nice to see her come down off her high horse.  I just really don’t like her.  At all.

#7) Jojen Reed is dead.  That part of the scene was a little hard to figure out.  For a few minutes I couldn’t tell if he were just dying of his stab wounds or if Meera were finishing him off, or if Meera were stabbing herself to die with him.  It was all a little confusing.

As a side note, Bran’s story is about to wander off into territory that creeps me out.  I’m a little claustrophobic, so the idea of Bran being stuck underground for the rest of his life—even if he gets to warg into all kinds of creatures above ground—freaks me out.  Although I’ve seen a few complaints that Bloodraven, the weirwood tree man, didn’t look gross enough, I’m fine with a little less gross in this series.  I mean, we’ve seen men flayed to death this season.  I don’t care that the tree guy doesn’t have a root through his eye.

#8)  Arya is a badass.  This is not news, but it bears repeating.  She was just so cold with the Hound, refusing even to finish him off, and I think this really gives show watchers (lovingly referred to as “shownlies”) a good look at how she is changing from a little girl to a stone-cold killer.  Her final scene with the Braavosi captain and then aboard the ship was a very fitting end to the season, in my opinion. 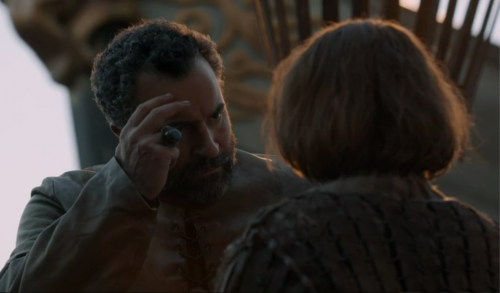 #9) This brings me to the big missing piece (according to many readers) that was expected in this episode and that caused a complete meltdown of fans when it didn’t appear.  Lady Stoneheart—Lady Catelyn Stark brought back to a semblance of life by Thoros of Myr—was not in this episode at all.  While lots of people were very upset about this, I don’t think it is as vital to the end of this season as many claim.  A LOT has happened this season, and the storylines after this are going to slow down quite a bit.  Saving her for next season is a perfectly acceptable decision.  (Unfortunately, I do think that this will be a plot point that is spoiled for many shownlies between now and next season.)

#10) The one and only thing that disappointed me in this episode was that Tyrion did not reveal to Jaime that Cersei has been sleeping around.  One of my favorite lines from the book is, “she’s been fucking Lancel and Osmund Kettleblack and probably Moon Boy for all I know.”  I still hold out hope that someone else will inform Jaime of Cersei’s infidelity, and will use that line.

So talk to me, people.  What did you like/hate about the episode?  Obviously, I thoroughly enjoyed all sixty-five minutes of it, but I know there are some strong feelings on either side.  Let’s have a discussion in the comments!