I am in no way, shape, or form an expert on the inner workings of the comic book industry. While a loyal fan, I am not privy to what goes on “behind the cover” so to speak. Having said this, I am really starting to wonder what exactly is going on at the Big Two when it comes to the nearly continuous reboots and rebranding that have occurred in my relatively short tenure as a comic fan.

Comic book publishing is a seriously tough industry, especially for companies such as Marvel and DC that have legacy characters. They have to walk an idiotically fine line between appeasing the lifelong fans who are the core of their business, while at the same time attracting new readers. This is particularly difficult because so many long-time fans enjoy the depths of continuity and have invested considerable time into the characters while the new fans are often intimidated by those exact same things. Even more frustrating is that comic characters are experiencing a massive surge in popularity thanks to movies and television shows. The most recent solution to this conundrum is to periodically reboot entire comic lines. 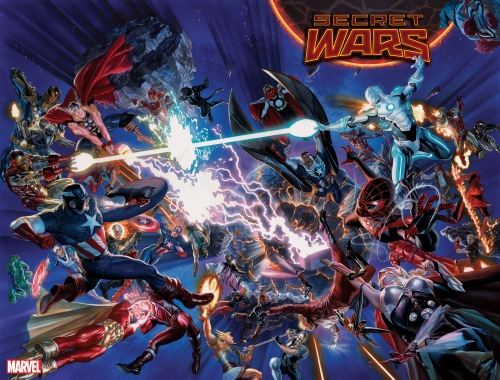 Now, don’t get me wrong:  I get the basic idea behind this. The goal is to create jumping on points which new readers will find more accessible. This is all well and good.  As someone who was new to comics not all that long ago I can appreciate the industry having my best interests in mind and making things a little easier. The problem is that comic publishers are trying to serve two, often contradictory, masters. Those same jumping on points that new readers find so amazing, often irritate more seasoned readers. These reboots often follow on the heels of yet another “groundbreaking” event that, at this point, just seem to rehash the same tired plots that have been written and rewritten for years now:  something shocking happens, things will never be the same, a new status quo is determined and then, more often than not, the old status quo slowly worms its way back into the story. After a few cycles, this pattern becomes unbearable.

As an engineer, I am a fan of the old saying “If it’s not broke, don’t fix it.”  In many ways this is my stance when it comes to comics. There have been several occasions where I was going along, really enjoying a book and all of the sudden an event popped up, changed things all around, and I now enjoy the book significantly less than I did before.

To be clear, I’m not talk about just changing the creative team on a book. I’m open to new creative teams. Eventually all good runs must come to an end, and I try to be as open minded about the next person to carry the torch as I can be. But more and more it seems as though comic creators feel the need to re-invent the wheel every time the team changes. Probably the most painful of these attempts in recent memory is the Fantastic Four. Johnathan Hickman’s run on Fantastic Four and FF was one of the best comic book runs in a very long time, especially for that set of characters. Hickman had an understanding of what made the book great and took advantage of it every chance he got.  However, the reboot that started after Hickman’s run was absolute garbage. It felt as though someone was dressing up different people in the same costumes. I have no problem with Hickman ending his run, but I find it difficult to understand why the book was immediately taken in such a different direction. Why screw with a good thing?

Marvel’s Tom Brevoort has said that, at least for the time being, comic fans should expect these soft reboots every few years, but I just have to wonder why this is necessary. Far be it from me to question how Marvel (or DC) runs their business, but it seems a bit excessive.  It is possible to cancel a failing title without some cataclysmic event to justify the action. By that same logic, world-changing events are also not required to start up a brand new book either.

I think it is possible to keep books going that are doing well, that tell awesome stories with fantastic art while at the same time phasing out those books that aren’t quite as good.  Will the disappearance of some books have an impact on other series? In a shared continuity, very likely. With a little bit of effort the Big Two can provide those jumping on points as well as maintaining stand out books. Change for the sake of change is bad. Change because something isn’t working is always a good idea.