Review: Sin City: A Dame to Kill For

I’ve seen many, many movies in my twenty-nine years. In all that time, I have never sat in an entirely empty theater, at least not until I went to see Sin City: A Dame to Kill For. I should have taken this as a sign, but then again, I’ve never been very good picking up on bad omens.

I can’t say I remember much of Sin City. I saw it shortly after it came out (nine years ago) and I was very likely drinking heavily. This means I walked into Sin City: A Dame to Kill For with an essentially blank slate. Since seeing The Spirit, I haven’t been impressed with movies based on Frank Miller comics. While I’m a big fan of Miller’s work on the page, it really doesn’t translate to the big screen. It’s possible to point to the success of Sin City and 300 in an attempt to disprove that, but I would argue that their success was based on both the strength of the story and the novelty of the style. This is the fifth time we’ve seen a similar style and the novelty has worn off.

The movie is broken down into four short stories, with the second of them broken into halves that bookend the third. The first is a particularly short one about Marv taking care of some idiot college students who have taken to lighting people on fire for fun. Although Marv doesn’t look like Mickey Rourke, he still has Rourke’s signature swagger. Rourke’s performance was actually pretty good, though not much nuance is required for a meat-head character like Marv. While the story isn’t bad, it adds almost nothing to the overall film. As an opening act, it really should do something to tie into the other stories. Instead, it just takes up time and the audience’s tolerance for the visual style.

The second story features Joseph Gordon-Levitt as Johnny, a gambler that never loses. Although I don’t understand the reason for breaking up this second story into two parts, it was one of the better stories in the movie. I’m a huge fan of Levitt and this is not his first foray into noir. This is also the story that is the easiest to understand. Johnny takes a chance and wins a one game too many and pays the price. Eventually Johnny does get his revenge, although the ending could have been given a little more gusto.

Finally, at story three, we get to “A Dame to Kill For.” By far the longest, the story itself isn’t all that bad, although it gets a kind of ridiculous towards the end. Eva Green plays a great femme fatale, and she is almost always naked or dressed in something translucent. While I enjoy seeing Green naked as much as the next man, there is a point where it becomes gratuitous and distracting. “A Dame to Kill For” hits that point about ten minutes to the story, maybe less. 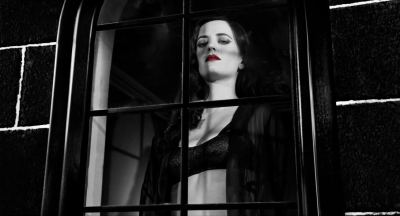 One of Green’s less revealing outfits.

Another thing that drove me absolutely nuts was the excessive use of voiceover. While necessary in comics, in a movie it becomes very annoying very quickly. It doesn’t help that most of the voiceover dialogue is absolute garbage. Frank Miller isn’t exactly known for his dialogue and this movie is filled with things that Miller thinks sound hard boiled and tough, but are more nonsense than anything else. The one bright spot I found was the use of negative filming and water. While I did say earlier that the visual got tiring, the negative effect that happens with the water is really very pleasing and something that I hadn’t seen before.

The final tale revolves around Marv and Nancy, the dancer who was the focus of Sin City. Nancy wants revenge from the death of her lover Hartigan in the first film. Throughout the other stories the audience has seen Nancy’s struggle, descending into heavy drinking and tormented by nightmares. Though relatable in some respects, Nancy’s eventual actions become unbelievable, even in the hyped up universe in which they exist. As Marv and Nancy storm the compound of Senator Roark, I couldn’t help but think that Roark’s bodyguards make Stormtroopers look like crack shots. Even at point blank range they can’t hit Marv, who could honestly be described as “the broad side of a barn.”

I was also surprised at the lack of wrap up to the film. The scene ended and the credits rolled. For a movie that abused voiceovers so much, I would have expected some type of concluding speech, but there was nothing.

Maybe it was the time gap between films (too little, too late) or just the changing taste of the average movie goer, but nothing about A Dame to Kill For lived up to expectations. With the apathetic response from fans and critics alike, the odds of more Sin City movies are very slim indeed.  I’d recommend that fans of Frank Miller’s work stick with the movies that have already been made and enjoying his work in its intended form, the comic page. 2/5 Death Stars.

2 responses to “Review: Sin City: A Dame to Kill For”