Review: Much Ado About Nothing

We all know I’m a comic geek.  In addition to this however, I’m also a fan of Shakespeare.  I started reading the Bard’s works in fifth grade starting with Hamlet and Macbeth.  As I’ve gotten older, I’ve also come to really love modern interpretations of the plays.  Among my favorites are Scotland, PA and 10 Things I Hate About You, and now I’m quite happy to add Joss Whedon’s Much Ado About Nothing to that list.

Probably the most distinctive thing about a Joss Whedon movie is the script.  Anyone who is at all familiar with his work knows that his writing has a very specific feel that is immediately identifiable.  Joss’s choice to use the traditional Shakespearean script instantly removes his most notable trademark and raises a self-imposed challenge —one that Joss hurdles almost effortlessly.  Instead of adding his quirky sense of humor to the back and forth banter of the characters, Whedon leaves dialogue to the master and inserts himself into the direction of characters and the addition of small, non-speaking scenes.

It is obvious in several scenes that Whedon is providing very specific physical directions to actors to make best use of the existing dialogue and to enhance the scene through their performance.  Although I find Shakespearean comedies funny on their own, these new directions that Joss provides take this to a whole new level.

During one particular scene Benedick is listening in on a conversation between several other characters.  While it would be simple enough to have him hide behind a bush or something similar, Joss instead has Benedick doing all kinds of ridiculous things to hide including lying flat on his stomach in the grass while trying to use a rather inadequate tree branch as cover for his face. The other characters are obviously aware of what is going on, but ignore him and continue with their conversation. I have no idea how any of these actors were able to keep a straight face while these crazy antics were going on just behind them.

One of the non-speaking scenes that added to the film takes place between two of the security guards. Thanks to the many conversations we’ve witnessed between them, we are already well aware that they are not overly gifted in matters of the mind, however to further reinforce this impression, this little scene shows the two of them searching for their keys, only to realize they locked them in the car.  This scene is completely unnecessary but it adds so much to the characters. It allows for the quick glance deeper that Whedon is known for, without saying a word. 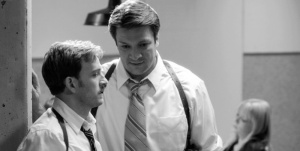 Nathan Fillion would like it known that he is an ass.

I would be remiss if I failed to mention the casting of this film.  Made up of many Whedon alumni, the cast works just as it should.  Unlike Shakespearean tragedies, the comedies feel more like an ensemble.  Despite having plenty of recognizable faces in the cast, there are no divas, and no true standouts.  This is not to say that none of the cast stood out, but more to say that the cast as a whole was amazing.  While I have no doubts there were several outtakes due to dialogue, I can’t remember any points in the film where the sometimes difficult Shakespearean English tripped up the actors.  It was all delivered cleanly and in a manner which helped make the often muddy much clearer.

I think the most telling thing for me is that I have almost nothing negative to say about this film.  Although I did have a moment of trepidation at the very beginning due to the seemingly stereotypical “indie film” opening scene, this was cleared up within another minute.  There were one or two times that I didn’t care much for the way a particular camera angle was used or that the music may have been a bit too menacing, but this was all so minor that it didn’t take away from the film as a whole.  Let’s be honest, if all I can find to complain about is a couple of camera shots and a minute or so of music, this is definitely a home run and damn near a grand slam.  Whether you are a fan of the Bard, of Mr. Whedon, or both, this film is definitely worth checking out. I already have plans to add it to my Blu-Ray collection.

Tagged as Joss Whedon, Movie Review, Much Ado About Nothing, Shakespeare

2 responses to “Review: Much Ado About Nothing”