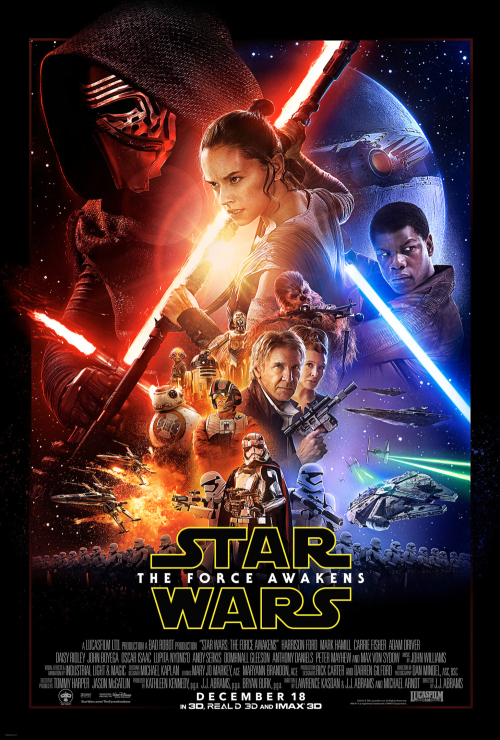 Star Wars: The Force Awakens is probably the most anticipated movie of 2015, and probably one of the most anticipated movies of the last ten years—at least, since Revenge of the Sith premiered back in 2005. When it was announced, and especially after the disappointment of the prequel trilogy, hopes were high but expectations were fairly low that Force Awakens could come in a save our faith in Star Wars. However, now that it is here, the general consensus (and my personal opinion) is that Force Awakens is one of the strongest movies yet.

Now to be fair, I think the success of this movie has a lot to do with the fact that Force Awakens is a return to what works for the series. While there are obviously  many differences, it takes a lot from previous films and I don’t necessarily see that as a bad thing. The similarities allow the audience to slip into a world that is comfortable and familiar, and the differences keep the viewers engaged, not knowing exactly what to expect. For a fandom whose fans are as overprotective as Star Wars, the opening scene of Force Awakens is immediately disarming and allows the fans to enjoy the film instead of immediately attempting to rip it apart. (In my opinion, this is one of the biggest flaws of the prequel trilogy:  it was all new and different. Audiences didn’t know what they were watching, but they quickly decided that it wasn’t Star Wars.) Force Awakens is clearly Star Wars, even if that determination was due to some heavy-handed borrowing.

Star Wars has always been a character driven story. Lightsabers are awesome and I personally love the massive starships that grace the screen, but if it were not for the characters, Star Wars would not be the memorable franchise that it has become. The creators did an amazing job of blending the old and new characters. Even so, Harrison Ford stands out as the foundation upon which the film rests. Han has lost nothing of his suave, scoundrel past, but is instead simply older, more experienced, and perhaps a little wiser. Although there is a touch of mentor in him, Han is far more of a bridge, connecting the older cast members to the new generation. He is at his best when talking, as opposed to flying or shooting (which Solo was known for in the original films). His dialogue reveals a much more mature character that has evolved while he has been away from the screen, instead of remaining exactly where we left him. 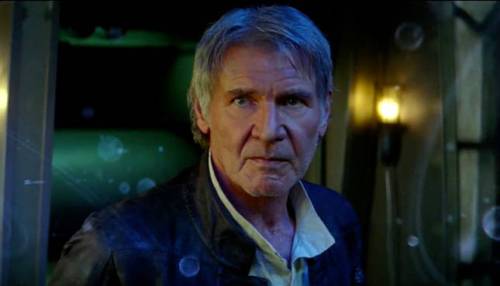 Speaking of the new generation, I was impressed by both Finn (John Boyega) and Rey (Daisy Ridley) and can’t wait to see them again in the next film. Finn showed an incredible amount of character growth in what is a pretty short amount of time. It is a credit to Boyega that he is capable of such a wide acting range, changing his characterization as Finn grows without losing sight of the character he is portraying. Finn was himself, even as he redefined who he was. In addition, Boyega is funny, helping provide the humor that was so sorely missed in the prequels (Jar Jar was unsatisfactory comic relief).

Rey, on the other hand, goes from tantalizingly mysterious to downright enigmatic. I have so many questions about her that I’m already counting down the days to the next film (522 at the time of writing, if anyone is interested). Rey also heralds  the return of the strong female protagonist to Star Wars. While Padme had tons of potential, as a former queen and current leading senator, she was almost entirely defined by her relationship with Anakin. This resulted in Padme being relegated to a secondary status, with the rest of the prequels revolving around Anakin and Obi-Wan. The current generation of fan is fortunate to get the female lead that my generation missed out on.

Even more than its heroes, Star Wars is known for its iconic villains. Kylo Ren is an interesting addition to the existing pantheon. Ren is a curious mix of Darth Vader and Anakin Skywalker. (Yes, I’m aware that I just said he is a mix of the same person.) While pulling inspiration from Darth Vader’s visual, Ren has many of the character traits of the young Anakin, especially as seen in Attack of the Clones, though at a higher power level. Ren is very much a servant of the Dark Side, often giving in to his rage. However, where previous Dark Side Forces users have been both talented and in control of their abilities, Ren lacks control. This is most often manifested in violent outbursts, but is also shown in the ways he uses the Force.

One of the things I have heard most often from people who have seen the movie is that they are very impressed with the visuals of this movie, especially when compared to the prequel films. This is in large part to two things: first is that it’s been sixteen years since The Phantom Menace premiered, and a lot has changed in terms of the quality of CGI and film making in general. If those films were made today, I feel like they would look better than they do. It is also important not to forget that they were impressive for their time. The second reason is that there was an intentional decision to do as much as possible using practical effects. The most obvious of these is BB-8, the orange rolling sphere that captivated fans from the moment he appeared in the trailer. The droid is almost entirely real. This makes a huge difference in the feel of the movie. Actors aren’t talking to nothing or some random spot on the wall, they are interacting with items and people that they can touch and feel. The droid’s operator can react to things the actors do and in return the actors can respond to things the droid does. In all this gives the movie a much more authentic feel. CGI Yoda may have been cool, but this is a much better and more believable way to go.

The Force Awakens is by no means a 100% perfect movie. There are little things that bug me and the more I go back and watch it, the more things I’m sure I will add to that list. What The Force Awakens IS is a return to what made Star Wars so beloved, great characters, cool science fiction and an entertaining story. It’s a wonderful beginning to the next chapter of my favorite space opera. 4.5/5 Death Stars