Staff Writer | City on the Edge of Forever

Earlier this year the crew over at IDW released the hard cover of the Graphic Novel adaptation of Harlan Ellison’s second draft teleplay of the famous Star Trek original TV series episode “City on the Edge of Forever.” This is one of the most famous and well-loved episodes of the original series as well as one of the most controversial.

There are two things that make “City on the Edge of Forever” stand out in the Star Trek canon. The first is that it is a fantastic episode. It was well designed, well-acted, it guest stars a young Joan Collins, and had a tragic ending. The other was that it was written by science fiction titan Harlan Ellison and then changed, pretty much beyond recognition, by Star Trek show runners.

For those who don’t know, Harlan Ellison is one of 20th century’s science fiction godfathers, standing along with writers like Bradbury, Asimov, and Heinlein. (He is best known to me for writing A Boy and his Dog, which was made into a movie starring Don Johnson.) While Ellison is credited as the writer of “City on the Edge of Forever,” there were many changes made to his original script to the point that Ellison wanted to take his name off the project. A good summary of the whole ordeal can be found on the wiki page for the episode. 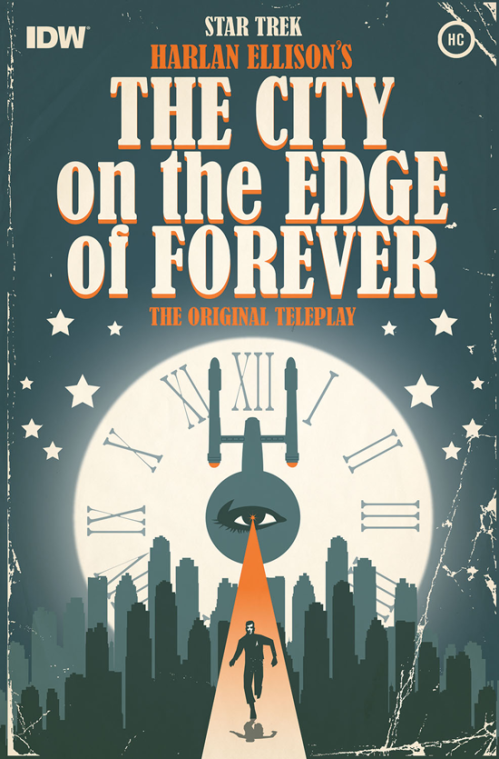 The episode aired on April 7, 1968 but in 2014, after almost 50 years, fans finally got to see the teleplay in the comic medium. (Ellison released a book in 1996 with two version of the script and an assortment of notes.) I have long held as an axiom that one really can’t properly compare movie or TV adaptations of books to the source material since they are two totally different mediums and stand on their own merit within their respective art. That being said, this comic script was meant for the screen and is basically being presented to fans as the alternative to the 1968 episode that was aired. That being the case, I felt that reviewing the book on its own and comparing it to its TV form is fair and valid.

At its heart “City on the Edge of Forever” is classic sci-fi. The central plot deals with the clash of human emotion, and moral intuition pulled to its extreme by technology far beyond the point where understanding is possible. The spine of the plot in the comic is pretty much the same as the aired show with some changes.

The Enterprise is in orbit over a planet and a rogue, drug dealing, crewmember named Beckwith has killed a crewmember customer of his, after the crewmember threatens to expose him. The murder is seen, so Beckwith escapes to the surface of the plant. Kirk and Spock lead a team to go after him and there they find the City on the Edge of Tomorrow and its guardians, called the Guardians of Forever. This seemingly abandoned city sits in a place where time has no effect, and with its vortex anyone can go anywhere in space and time, or as Carl Sagan would put it “Somewhere else in space, some when else in time.” Beckwith escapes into the vortex and his disruption is such that Earth’s whole history is altered. Spock and Kirk must go back in time to stop him. They find themselves in 1930’s New York City trying to figure out what exactly Beckwith changed in the timeline, but once Kirks sees what he has to do to keep the timeline intact he is unsure if he can go through with it, as it means the death of a woman named Edith who he has fallen in love with while in the past.

A Guardian of Forever

The story is solid and Ellison adds many gritty and realistic touches to the Star Trek universe. It opens with a crewmember named Beckwith who is an amoral drug dealer selling to another crewmember. This was something I really liked. Often times the Star Trek universe can feel a little too utopic and the show creators seemed to pretend that the more dirty elements of humanity just went away. Most of the story focuses on Kirk, Spock, and Edith. None of the other main cast members make an appearance in Ellison’s script. The only other familiar face is Yeoman Rand, play by the late Grace Lee Whitney, who died this year.

Once the characters are in the past, it is their interactions that are the scripts true strength. Ellison’s Spock is very offended by Earth’s past, and is not shy about showing it. This brings him into a few testy exchanges with Kirk. Ellison seems to work more with Spock’s human side than other writers do and it’s a little strange at first but a welcome surprise. That being said there are also some very personal moments between Spock and Kirk that go a long way toward showing how deep their friendship is and will become.

What works really well is Kirk and Edith’s love affair and Kirk’s struggle with his growing realization that his mission is to let her be killed. Ellison takes care to explain Kirks anguish at the feeling that after years and years among the stars and with a girlfriend in every port, this is the first women that he has truly cared about. This was, to me, the great strength of the book. Ellison puts Kirk in a position where he must sacrifice the only woman he’s ever loved to save history as we know it.

IDW did a fantastic job with this book. I picked up the hard cover graphic novel that came out this year and I would suggest you do too. It includes an intro and outro by Harlan Ellison himself where he glowingly endorses the book, as well as cover art galleries from the periodical releases and artist notes and commentary about the adaptation. I was particularly interested to learn that artist J.K. Woodward didn’t use any digital assist in making the book—it was all hand painted. Woodward’s artwork is the glue that holds the book together. It is lush and full, and each panel has the feel of a painting. He takes great care to re-capture the faces of 60’s Shatner, Nimoy, and Collins, as well as using the show as reference to add nostalgic familiarity, all while bringing Ellison’s vision to life. A tour de force if there ever was one in comics.

I don’t think I could complete this review with at least some comparison to what was eventually filmed for the show. There were a ton of changes made to Ellison’s script; so much so I’m stunned that the episodes credits say in it “written by” Harlan Ellison and not “story by”. Many of the changes made I actually liked. The show had a lot more screen time for the rest of the cast, giving the audience little bit of Sulu, Scotty, and Uhura. The show also dumped all of the Beckwith stuff and replaced it with McCoy going crazy after an accidental overdose. This was one of the biggest changes and I think the best since it lead to the episode’s most dramatic moment.
On the wiki page, director Joseph Pevney is quoted as saying of Ellison’s script, “Harlan had no sense of theater… in the original script’s dramatic moments, it missed badly.” I have to agree whole heartedly. The best example was the very end when Edith is hit by a truck and killed. In Ellison’s script it is Beckwith who, for whatever reason, tries to save her and Spock stops him, all while Kirk watches helplessly. This was a big disappointment for me. However, in the show it plays much better and a bit more logically. Bones, after recovering from his drug psychosis, is the one who tries to save Edith after he has been nursed back to health by her. It is Kirk who holds Bones back at the climactic moment. Shatner, for all the jokes made about his acting ability, is pitch perfect in this truly heartbreaking scene. It also leads to some of the most memorable lines of the show.

McCoy: “You deliberately stopped me, Jim? I could have saved her. Do you know what you just did?”

Spock: “He knows Doctor, he knows.”

I will go so far as to say I don’t think “City on the Edge of Forever” would have been as memorable as it is today without that scene being written and filmed that way. The moral conflict and emotional impact is pretty clear. It is one thing to agree that the needs of the many out weight the needs of the few or the one. It becomes very different when you’re are the person that must kill that person in order to save many, and even more difficult when that person it the one you love and wish to spend the rest of your life with.

The other show improvement on Ellison’s script was how it portrayed the cost of allowing Edith to live. In the comic, Spock only conjectures as to why Edith has to die, while in the show it is spelled out specifically. Her anti-war activism delays America’s entry in to World War II, thus giving Germany enough time to nuke the world.

Where the show leaves a bit to be desired is in the interactions between Kirk and Spock, and Kirk and Edith. Ellison creates far more tension and bonding between Kirk and Spock, as well as far more believable romance between Kirk and Edith. I believed their love affair much more in the comic, where it grew organically; whereas when Kirk admits he is in love with Edith in the show, it seems to come from left field. In the comic they bond over shared ideology and well as a shared affection, rather that Edith’s belief people will one day make it space.

Ellison bristles in his intro at the notion that his script was too long and that parts could not be done with the special effects of the time. However, I have to agree with the show runners here again. As I was reading the comic I got the sense that filming all the dialogue and the FX would make for over an hour of TV time.

This graphic novel is a must have for any sci-fi, Harlan Ellison, or Star Trek fan, particularly the current hard cover. In the end I would have to side with the “Show version was better” side. However, I do think Ellison’s script is a fascinating and wonderful read, complimented brilliantly by J.K. Woodward’s art. It serves as an excellent addition to any collection.