This October was the 10th New York City Comic Con. Of those ten, I have gone to eight. NYCC was the first convention that I ever went to, and it played a major part in getting me into comics when I was in college. I am not interested in the vast majority of the mainstream comics like Marvel and DC and I’m not a big super hero fan. Don’t get me wrong, I always go see the movies, and I like the cartoons, but that’s about it; so one of the things about NYCC that appealed to me was being able to easily locate the types of books I was looking for and find new ones that I normally didn’t find at the stores. It was also a great place to meet some great people, like writers, artist, etc. who were all very accessible.

From about 2007 to 2013 myself, along with lead Poo-Bah Geek here at Therefore I Geek, Andrew, and the illustrious Chris, would go together. Over the years the convention scene has exploded, mostly (I think) to the increased mainstream celebrity presence at the major conventions. NYCC has grown from about 30K in attendance to 151K in 2014.

This year I made the trip back to New York City to enjoy what could be my last NYCC for a long time. At the risk of sounding like one of those “it was better back when it wasn’t so big” guys….. it was better when it wasn’t so big. Last year, in lieu of going to NYCC (due in so small part to not being able to get tickets), I went to Baltimore’s two day con. It was one of the most pleasant con I had attended in a long time.

So as I planned to leave for New York, I wondered: would this trip be any different? Would 2015 restore my love and loyalty for NYCC? Well, I wasn’t off to a good start on the day when tickets went on sale. By the time the screen loaded to purchase the passes, 4-day, 3-day, and Saturday passes were sold out. Armed with a new sense of determination and a new job’s paycheck, I opted to get two passes for Thursday, Friday, and Sunday each for myself and the girl.

Flash forward to this October and the girl and I are ready for our comic con weekend. I can remember when the con expanded to Thursday. If I remember right, it was originally just for a half day, and only meant for those who wanted to beat the crowds coming for the weekend. In other words, it was supposed to give convention goers the small con feel with big con options.

Those days are gone. Normally I can sense when the crowds will be light or heavy, but this year on Thursday it was already packed. And it wasn’t like Thursday was a half day like when the con first started opening for the extra day, nope, it was just like the rest of the days.

The show floor hasn’t changed much. It’s still huge and packed, and it was packed all three days we were there. Girl and I decided to try walk the whole show floor on Thursday and get a feel for what was there. We got into the Javits a little bit after 2:00 pm, so I reasoned that in five hours we could cover the show floor if we just stuck to our snake method. Wrong. The aisles are number 100 to 3000 going from north to south. The crowds were so big that we started on 3000 and only managed to make it to 2100 before the show floor started to close.

This has always been a paradox for me lately at the big cons. How much time does one really want to waste sitting in line for a panel that will last about an hour and normally will run long, forcing one to rush just to get on line for another. Lately my answer as been, “Zero.” 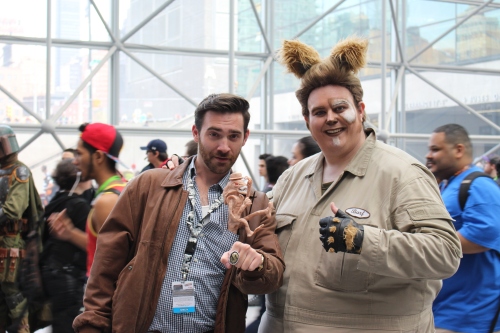 Artist Alley, which has lately been in its own separate room on the south side of the Javits Center, was still very good. It was just as packed as the show floor if not more so. I’ll have to admit, I’m not great with artist names the way other comic fans I’m sure are. I normally just go by style and content. I was really happy to see that one of Frank Frazetta’s granddaughters had a booth set up. She was selling some high priced lithograph prints as well as $10 prints of almost every painting the man has ever done. The $10 ones really impressed me since she was selling almost 200 different images. I’m always impressed by the talent some men and women have. I just enjoy walking around and taking in the near sensory overload of art. This is a talent I’ve been envious of for a long time. One of the great things about going to artist alley in such big cons is that guests won’t be left wanting for their favorite artists. The downside is that it was packed. In fact, there were so many people coming and going through the tunnel to artist alley there was a major bottleneck next in the tunnel. It got so bad that convention staff had to step in and direct traffic.

The autograph area was pretty much the same it has been for the last few years. For the most part I’ve never been interested in this part of the con. Again, no one left wanting for celebrities to see at either the autograph area or panels. It was pretty cool to see the three men who donned the Godzilla suits. We were hoping to see Billie Piper from Dr. Who. I liked her from Secret Diary of a Call Girl. She canceled.

I know that NYCC merged with the New York Anime Con a few years ago but that was another aspect that seemed very under-represented, or at least didn’t jump up out at me. I can remember a few years ago the anime folks had their own section of the show floor which was the most packed part. This year it seemed more spread out and as a result was almost entirely diffused and lost in the bigger mass of pop culture.

The costumes now are pretty much the main attraction for me. There was an eight foot Iron Man Hulk Buster suit that was unreal. I wasn’t to see the costume contest this year, but it’s fast becoming my favorite con event.

After this NYCC, I think I’ve had my fill. That being said, I went a bit nuts (at least for me) buying stuff this year might be an understatement. I was happy with the haul but I couldn’t help but feel that most, if not all, of it could have be gotten at another smaller, more manageable con.

For me I think it’s just the sheer volume of the people that frustrates me and makes the con less enjoyable. You can’t really move around and take in all the things the con offers. The idea of going to panels has been a non-starter at this point. While I won’t go as far as saying I’m done forever, nor would I actively dissuade people from going, I think I’ll start to focus on smaller cons on the west coast.

At this point I’m not sure where NYCC can go from here, but this one con goer is very content to now watch from the sidelines.