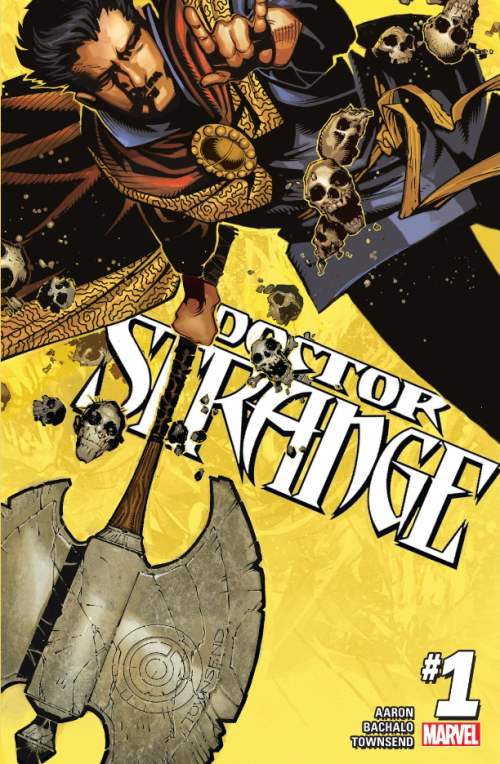 As we near the end of Marvel’s Secret Wars, we are slowly seeing the influx of new books coming out. One such book is Doctor Strange, appearing in his first solo series in many years. While I’m uncertain how Secret Wars will transition into this particular book, I’m rather pleased with what I’ve seen so far.

It probably helps that the creative team pairs one of my favorite super hero writers, Jason Aaron, with one of my all-time favorite artists, Chris Bachalo. While Aaron’s initial few issues of Star Wars were less than ideal (although that has much improved), his run on Thor: God of Thunder was absolutely amazing and one of my favorite modern runs. Even without seeing Aaron’s name on the front cover, I knew right away this was his work and I was going to love it. Aaron gives unfamiliar readers (myself included) a quick primer in the good Doctor’s backstory, enough to get started, and then jumps right into the story that he is looking to tell. While I am certainly open to a re-telling of his origin, I’m quite pleased that valuable page space isn’t wasted in rehashing old material. The essentials are covered and then we are off to the races. And once this story gets going, it stays true to Doctor Strange’s tradition of being the home of the weird and bizarre. I really liked the fact that although Strange is the Sorcerer Supreme, he is not quite as in control as it may seem. Strange’s inner monologue at the beginning tells the reader that beneath the calm façade is a much less unshakeable foundation that it would appear. Jason Aaron also provides some great back and forth dialogue throughout the whole book. Start to finish, this books feels like real people talking, only they’re talking about really weird shit.

The reason I didn’t realize Jason Aaron was writing this book is because I was sucked in, uncontrollably, to the Chris Bachalo art. His bold and angular style is particularly suited to the very weird things that Strange sees throughout the book. Creatures of all shapes, sizes and colors are present and they all have a distinct look to them. Bachalo also makes great use of color, or rather lack thereof. When Strange is looking at the ethereal creatures that inhabit our world, unseen to the masses, the creatures are wonderfully colored, but the rest of the mundane world is in black and white. This helps highlight both the creatures as well as the idea that what Strange is seeing is special, when compared to what everyone else is looking at. Even in those moments that aren’t highlighting the supremely odd, Bachalo’s art is still outstanding. I’m also consistently impressed with his use of backgrounds. While comics have come a long way from the early monochrome backgrounds of those Superman comics, it’s the hallmark of a quality artist when they put the time not only into the characters they are illustrating, but also the environment they are inhabiting.

Overall this is a solid beginning for a book that I hope has a long and successful run. Not exactly something I thought I was going to be adding to my pull, but I’m excited to see where it leads and how our hero will weather this latest storm. 4/5 Death Stars.