I love to cook. I get immense joy from making something I can enjoy with my friends and family. However, I usually write about manga and anime for Therefore I Geek, so at this point you may be wondering, “What does cooking have to do with manga?” Well, it has quite a bit actually. There are quite a few manga that teach their readers how to cook. For specific recipes, there is even a manga cookbook.

I own this cookbook and have used it quite a few times. It is full of simple but delicious recipes, especially good for quick lunch ideas.

While there are several cooking based manga, I have limited this post to five manga that have recipes I have personally tried and enjoyed.

Cooking Papa is one of the longest manga series in existence, with over 130 volumes so far. They are episodic so readers can pick up any volume and read them in any order. The series tells the story of Kazumi Araiwa, an average salaryman—hardworking, no nonsense, with a wife and child. He is the envy of everyone in his office because of the amazing lunches he brings to work. Everyone tells him how lucky he is to have a wife who is such a wonderful cook but the secret is that he is the chef. He loves to cook but keeps it a secret because in his culture it is seen as unmanly for a man to cook his own food if he has a wife at home to do it for him. 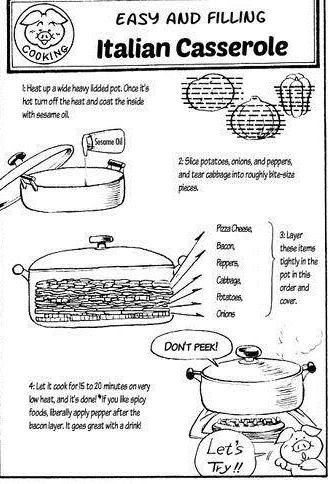 The recipes found in these books are easy but quite tasty. Kazumi likes to make several different types of cuisine so there is always something interesting to try.

This manga takes food and foodie culture to an all new (and perverted) level, by playing up the trope of foodgasms that people have on newer foodie television shows. It’s definitely not for everyone. There is a lot of nudity—though the images are censored. 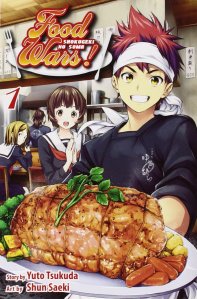 The recipes in this manga are more advanced than cooking papa and some are fine dining meals, which could impress guests. If you are up for a challenge, and don’t mind gratuitous, over-the-top nudity, then this would be a fine manga to read.

What Did You Eat Yesterday?

This manga follows Shiro as he makes meals for his boyfriend and friends. These are traditional Japanese meals. The recipes are simple and because Shiro is… well, we’ll be nice and call him frugal. Cheap is a bit harsh, especially considering he saves as much money as he can since he realizes that he will have no children to care for him and Kenji. Because of his frugality, the ingredients in his recipes are inexpensive. Readers may have trouble finding some of the ingredients at local supermarkets, but they are easy to find at Asian markets, which are growing in popularity in the United States. 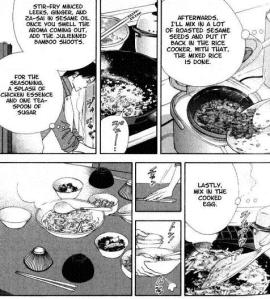 Out of all the manga I will mention in this post, this is my favorite. It really shows what life as a married couple is like (although they aren’t technically married since gay marriage is illegal in Japan), the struggles of saving, and the sweet calmness of a loving partner, all without being saccharine.

The recipes are a bit different in this manga than the ones I have shown above. The recipe itself is told in the manga as Shiro is cooking, and there is no separate ingredient list or set of instructions.

Wondering which wines pair well with the delicious recipes in the mangas I’ve recommended? Drops of God can answer this query. This manga is so popular that it has helped increase wine sales in Asia. Japanese importers use it to decide which wines to import into the country, and the sale of wine in South Korea has risen from 33% of all alcohol sales to 70%. 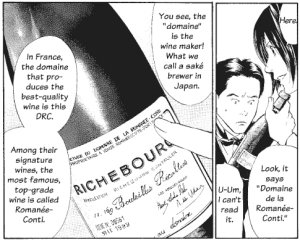 I must admit that I too began drinking more wine after reading this. I still prefer whiskey but my knowledge of wine has definitely increased as a result of reading this manga.

So you’ve eaten a lovely meal and had a nice bottle of wine. How about something sweet to end the meal? That’s where Kitchen Princess comes in.

Kitchen Princess is a manga about an orphan girl who is saved from drowning by a boy. He gives her his flan to make her smile and she promises to someday make him the greatest dessert. A few years later she joins Seika Academy (the school where the spoon the boy gave her to eat the flan with is from) to become a chef and find her “Flan Prince.”

There are a lot of recipes to try, and this manga is full of romance and sweetness.

So there you have it. A whole bunch of manga to read to help you with your cooking, including both recipes and little tips. Have fun in the kitchen!