Until recently, DC has been the undisputed champion of superhero shows. Sure, Marvel has done pretty well with Agents of S.H.I.E.L.D., but even that is only a qualified success. Now with the Netflix/Marvel series Daredevil, DC’s supremacy in the realm of television is no longer a sure thing.

This series is by no means the same Daredevil as the 2003 Ben Affleck film. When Marvel originally pitched the series, they made it clear that Daredevil would not be just another version of The Avengers. Matt Murdock would instead be a street level hero, fighting to protect the neighborhood that he grew up in and loves. Marvel absolutely lives up to its promises. This new show is a dark and gritty look at Hell’s Kitchen, one of New York’s most infamous neighborhoods, its protector, and those that would wish it harm. While there is a temptation to overdo the grit and gravel, Marvel thankfully stays away from that path. There is just enough of the Frank Miller darkness that events and places seem real, without crossing over into stylized parody. Matt Murdock isn’t a superhero; in fact, he is very nearly a vigilante. At times his motives become cloudy, even to himself. The series does a wonderful job of exploring how far a man is willing to go to uphold his ideals.

The real beauty of the series rests in the casting. At the top of my list, and apparently just about everyone else’s, is Vincent D’Onofrio as Wilson Fisk, Kingpin. It’s far too simple to make Fisk a one dimensional crime boss, but it isn’t necessary. The source material provides plenty of nuances that are worth exploring, and D’Onofrio does an amazing job. There is so much wonderful depth to the character. Though he is a man with incredible power and influence, he has many insecurities and idiosyncrasies that define his personality and provide a counterbalance to his considerable strengths. Fisk is capable of so much and yet he allows himself to be limited.

Most interesting of all is his relationship with Vanessa. She is both the source of his greatest strength and his Achilles heel. His feelings for her give him purpose, and yet when his enemies wish to strike at him, they go after her. In doing so, they successfully derail him and yet give him focus. Fisk is also difficult to hate because, while what he is doing is questionable, his desire is to improve his neighborhood and to make things better than when he was a kid. Those are honest and pure motives, however his ends don’t justify the means.

A very close second to D’Onofrio’s Fisk is Elden Henson’s Foggy Nelson. Foggy is not a glamourous character. Where Matt is good looking and charismatic, Foggy is very plain and unassuming. But what he is lacks in looks, he makes up for by being the moral compass of the series. Although he may still want a paycheck, his true aim is to do good for those less fortunate than himself. Foggy is always asking if what he and Matt are doing is the right thing. Although he may not have started off wanting to go down this particular path, he fully embraces it. He is Matt’s best friend and when he finds out Matt’s big secret, he does what any true friend should do, and calls him out on his actions. He has a strong affinity for the rule of law and as a lawyer he fights to uphold that rule, even when it’s his friend who is the one violating that law. Foggy isn’t always successful, but that never stops him from trying. His heart is always in the right place. In the darkness of the series, Foggy provides a steady beacon of hope that is much needed. 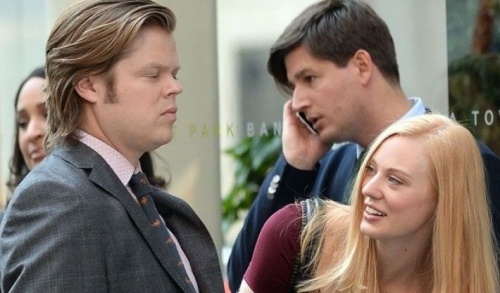 This week it was confirmed that Netflix has picked up Daredevil for a second season. While this is exciting news in and of itself, what makes it even better is the fact that this season is jam packed with wonderful little extras that will pay off both in other upcoming Marvel/Netflix series, but also in the next season. While no date is set for Daredevil’s second season, the possibilities for it are nearly endless and that gives me a great, warm fuzzy feeling.