Shiawase na Kyujitsu mina-san! Happy holidays to you all! In my never-ending quest to get more people interested in manga and anime, I’ve learned that one of the easiest ways to get people to try new things is to make suggestions based on the type of entertainment that they enjoy.  Today, I’ve compiled a list of items that you should include on your anime wish list. Are you a fan of the Hunger Games? Breaking Bad?  Supernatural? Game of Thrones? Then boy, do I have suggestions for you!

If you like Hunger Games, give Battle Royale a try. 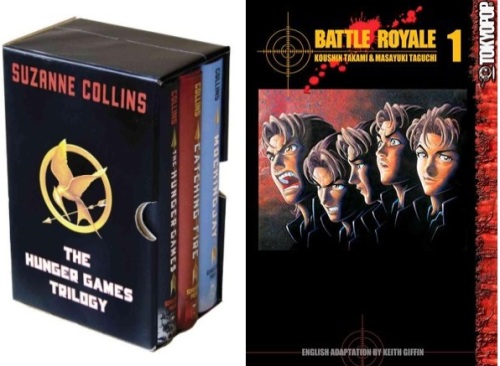 When the first Hunger Games book came out, many fans of the book, movie, and manga versions of Battle Royale claimed that Suzanne Collins ripped them off. Collins has been asked several times if she knew of Battle Royale before writing her series, but she’s always said that she was unaware of the book and didn’t plan to read it.

Battle Royale takes place in a police state called the Republic of Greater East Asia. Every year a class of 9th graders, fifteen to seventeen years old, is chosen for the program, a military exercise where the classmates are forced to kill one another until only one remains. They are left on a deserted island with only a survival pack, which may include a weapon or a tool. Explosive collars are placed on the necks of the students so if they haven’t completed the program in three days or they try to escape the island, the collar will detonate. The winner is declared a hero and returns home as a celebrity. These events are televised throughout the country and the population is forced to watch the program.

While I am a big fan of the movie and book, I am recommending is the manga because it is my third favorite manga of all time and I’ve read hundreds of manga.  The series comprises fifteen volumes and which allowed Takami to expand on the back-story of several characters, providing more insight into the reasons behind their actions as well as letting characters that played a small role in the movie or book have a chance to shine.

I must warn you that this series is very graphic. The Hunger Games is a young adult series but Battle Royale is meant for adults. There are parental advisories on every volume and it is rated MA. If you are interested in psychology and the human condition then this series is a must read. 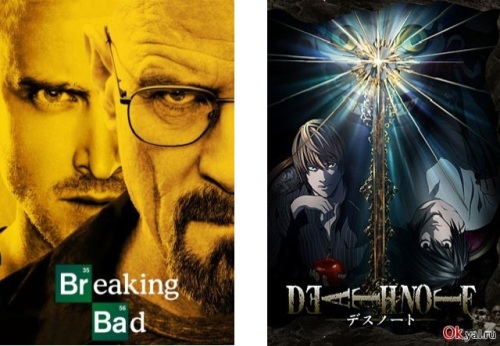 On the surface these two shows don’t seem to have much in common. One is firmly grounded in reality while the other has supernatural elements. However, beneath the surface there are significant similarities. While the Death Note manga is a wonderful read, I prefer the anime, because the art is lovely, the music is powerful, and the voice acting is top notch on both the English and Japanese versions. Let me tell you what this series is about.

Death Note tells the story of high school student Light Yagami who is the son of a police chief. He is a genius but he bored with his easy life. One day he finds a notebook that belongs to a Shinigami (Shinigami means death god, basically what we would call a grim reaper here in the US) that will kill whosever name is written inside. He can even control how when and how the person dies by writing the details in the notebook.

Both of these series deal with characters who originally had good intentions (Walt wanted to provide for his family after his death, and Light wanted to rid the world of criminals) but had their intentions corrupted by power. They both transformed over time, bending their morals to the breaking point, and doing things that they originally would have found reprehensible.

Is Supernatural your favorite show? Maybe Blue Exorcist is the show for you (or perhaps even the Supernatural anime).

Supernatural is a show that I love and it really reminds me of an anime called Blue Exorcist. Also—and this came as a big surprise to me when I first found out about it—Supernatural is insanely popular in Japan. There are so many, mostly female, fans of the series who love Sam & Dean that an anime version was made of the show.

Blue Exorcist is about two brothers who fight against demons. One of the brothers is brash and prefers to fight and use brute strength, while the other tends to do research and uses his wits to fight the demons. The brash brother has a very close connection with demons and has trouble with sometimes using demon powers that his brother is always telling him not to use for fear that he will be corrupted. Is this ringing any bells? Blue Exorcist has more side characters than Supernatural but it is a fun ride and worth a watch.

Big fan of Game of Thrones? Check out Berserk or Legend of the Galactic Heroes.

A Song of Ice and Fire is one of my favorite fantasy series ever. When the show was announced I was a little nervous because well it’s natural to get worried when something you love is adapted. Yes I have a few nitpicks but honestly I am very happy with what has been done with the series.  Fortunately for fans left waiting for spring and Game of Thrones season five, here are some other entertainment options that are very reminiscent of the HBO series’ style.

Berserk is a manga series about Guts, known as the Black Swordsman, who is somewhat of an outcast and is constantly trying to escape from the demonic forces that follow him. He fights on the front line as a mercenary and met Griffith, leader of rogue soldiers called the Band of the Hawk, who asks Guts to join him and help win the war. This manga reminds me of Game of Thrones because of the sheer amount of violence and gore and the fact that it is based in a more “realistic fantasy” setting much like Game of Thrones. There are also political elements but the series is mostly violent.

Legend of the Galactic Heroes, which is even more similar to Game of Thrones, is set in a sci-fi universe. The series concentrates on the war between the Galactic Empire and the Free Planets Alliance, and the characters of Reinhard von Musel and Yang Wen Li who each want to come out on top.

This anime has it all. There are aristocrats, politicians, and generals all fighting to win the war using any means necessary. This includes scheming, murder, political maneuvers, all the things I find interesting in Game of Thrones. It also shows the dangers of being on the front lines of such a war. It introduces a rich world with many characters and provides insight into all sides of the fight, which is something I love about the Song of Ice and Fire series.

Legend of the Galactic Heroes is my second favorite anime of the 1000+ plus different anime that I’ve seen. I cannot recommend this series enough. Unfortunately, this series is unavailable in America. It was originally an OAV (Original Animated Video) which means it was never shown on Japanese television. It was a labor of love and released on VHS for the select fans who had heard of it. However, I think it’s something that should be seen by fans of good storytelling.  Blu-ray and DVDs of this anime without English subtitles are for sale on Amazon for exorbitant prices, but I get my fix from the streaming websites, goodanime.net and animeflavor.com.  The first episode is available on YouTube if you want to try out the series before diving in.

So have I given you all some items to add to your wish lists? How interested are you in the series that I mentioned to you? Are there other anime or manga that you feel better match Game of Thrones, Hunger Games, Breaking Bad, or Supernatural? Let me know in the comments section.

One response to “Personalized Anime Recommendations for the Discerning Geek”