Over the past couple months, we’ve had several requests from readers who are interested in comics, but would like to know about some black heroes. So in order to help our friends out, I’ve gone through and come up with a few of my favorites and some of the more popular ones. This is by no means an all inclusive list, but instead a good place to start.

One of the four Green Lanterns from Earth, John Stewart has been guarding Sector 2814 since the early 70’s. Stewart is the by far the most stable and reliable of Earth’s Green Lanterns, providing a grounded perspective, especially when compared to fellow Lanterns Hal Jordan, Kyle Rayner and Guy Gardner. After the launch of DC’s New 52 Stewart took over the star role in Green Lantern Corps.

Victor Stone became Cyborg when he was seriously injured by a creature from an extra dimensional experiment gone wrong. Initially a member of the Teen Titans, Cyborg has earned himself a place as a fan favorite. Cyborg has taken an interesting turn in the last few years. There has been a serious push to make him more of a big deal since the start of the New 52. This has included making Cyborg a founding member of the Justice League, giving him a leading role in Teen Titans Go! and a rumored appearance in the new Superman-Batman movie.

Bishop is a personal favorite of mine. This badass mutant comes to us from a future where mutants are persecuted and forced to have an “M” tattooed over one eye. Bishop is also the creation of Image co-founder Whilce Portacio. Given his future origins, Bishop helps to add some exciting future time line stories to the X-Men. Although Bishop hit on some hard times after “Messiah Complex”, he has recently made a comeback in Uncanny X-Force vol. 2.  (However, if you enjoy Bishop, you can just skip the entire last volume of Cable. It’s painfully bad writing and Bishop comes across as pretty lame.)

When rebooting the X-Men in 1975, Marvel chose to take a more diverse approach to their mutant team. Joining Japanese, Canadian, Russian, German and Native American team mates was Storm. Born to an American father and an Kenyan mother, Storm was orphaned at a young age and became a local priestess in Kenya. After being recruited by Professor X, Storm becomes an invaluable team member and eventual team leader of the X-Men. Eventually Storm also marries Black Panther, becoming queen of Wakanda. 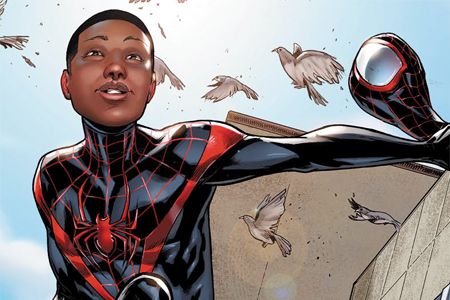 After the announcement that Sony was rebooting the Spider-Man film franchise, there was a huge call to cast a young black man as Peter Parker. Marvel had other plans, and when Peter Parker died in Ultimate Spider-Man he was replaced by teenaged Miles Morales. Although he shares certain characteristics with Peter, Miles is most definitely his own character and has quickly gained a significant following. In my opinion, if you want to change the ethnicity of a character, this is the perfect way to go about doing it. Instead of just altering the existing character, Marvel has given fans a new and unique person that they can relate to and get behind. Even with the reboot of the Ultimate universe, Miles will still be playing a starring role in the new lineup. 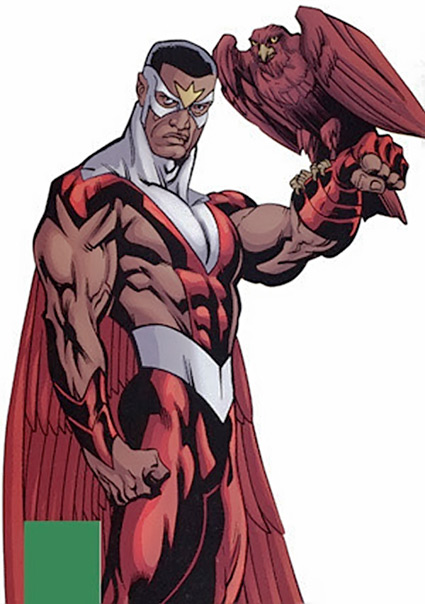 One of the best examples of early diversity in comics is Falcon. In a time when most black heroes were relegated to secondary or sidekick roles, Falcon was introduced as Captain America’s new partner. He is one of Marvel’s first black heroes and is the first one without “black” in his name. Falcon has been a consistent leading member of the Avengers. Falcon also makes a great showing in Captain America: The Winter Soldier.

Not all super heroes run around in capes and tights. Luke Cage is the epitome of a street level hero. Cage has made his way from prisoner to hero for hire and eventually to running an Avengers team of his own, The Mighty Avengers. Even with all his super hero duties, Cage manages to have a wife and daughter. Although he gave up the hero game for a while, he is back to his old tricks and his old team in Mighty Avengers. Cage is also set to star in one of Marvel’s new Netflix miniseries of his own, part of a Defenders series.

As king and high priest of Wakanda, Black Panther is one of the most prominent black characters in comics. Black Panther is also the first black superhero in mainstream comics, pre-dating Falcon by three years and DC’s John Stewart by a full six. Black Panther has been a member of several Avengers teams as well as the shadowy Illuminati. There have been some great Black Panther stories recently in Avengers vs. X-Men and New Avengers.

Spawn is actually getting our “first runner up” award. Since Spawn is actually dead and no longer in possession of his own body, it’s a little tough to say he is a black hero. Having said this, before dying Spawn was Al Simmons, a totally badass special ops soldier. It should also be noted that it’s one of the few comics that has a supporting cast that is dominated by black characters. I’m a big fan of Granny Blake personally. She never loses her faith in Al and often proves to be his conscience.

A recent addition to the X-Men, Idie is a great character. She was one of the first five mutants after M-Day. Idie was being persecuted as a witch by her village in Nigeria when she was rescued by Hope. Since then Idie has joined the Jean Grey School and has been a central part of Wolverine and the X-Men. Although she regularly struggles with her powers as they relate to religion, she is also an extremely kind hearted person, taking a particular shinning to Broo, and even tolerating Quentin Quire. 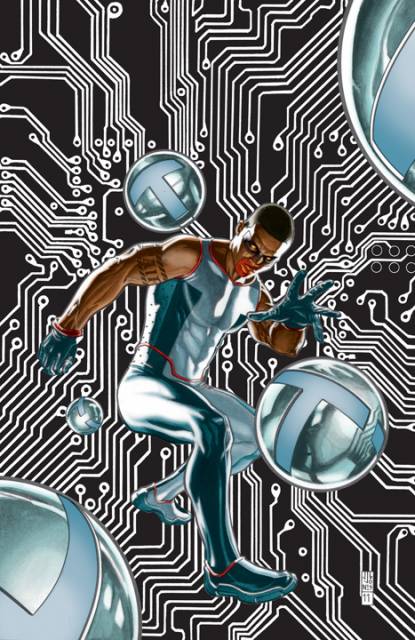 In 1997, Michael Holt took over the mantle of Mister Terrific. Holt, a millionaire genius Olympic athlete, is the modern Justice Society of America version of Batman. Holt is a great example that rich, successful geniuses don’t have to be white guys. While his New 52 title didn’t work out, the character has made his way over to Earth-2 and doing great things there.

When Batman decided he need to become not just a man, but a brand, he turned to Batwing, a Congolese police officer to protect Africa. While he was eventually replaced with Luke Fox, son of Batman ally Lucius Fox, Batwing continues to be a member of the Bat family, pulling more international duty than most of the other members.

Do you have a favorite character that we left out? Let us know in the comment section below.

3 responses to “Our Favorite Black Heroes”