Review: Attack of the Killer Tomatoes! 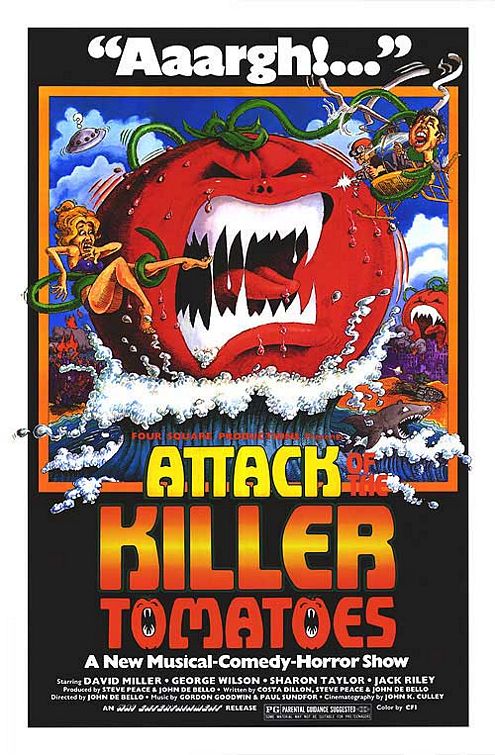 Sometimes B movies try to take themselves way too seriously. Directors think that the movie is the big break they’re looking for and instead of having fun with it, they end up looking silly. What makes Attack of the Killer Tomatoes! so fantastic is that it is self aware and often exploits its own grade. Just one look at the opening credits reveals this. In between actual opening credit shots are furniture ads and a “space available” sign. Attack of the Killer Tomatoes! is a great example of what the B movie genre can really be. There is no exploitation, no sex, and no excessive violence, just an amusing story full of quirky humor and the generally bizarre.

While much of the movie is nonsense, the plot sticks around for at least forty minutes (far longer than I remember it doing), and maintains some plot threads even after the rest has degraded. The movie follows two separate stories, that of White House Press Secretary Jim Richardson as well as Federal Intelligence Agency agent Mason Dixon and his covert team. Like any good Press Secretary, Richardson’s job is to try and spin the tomato attacks in such as way as to save face for the President. Mason’s job is to investigate the source of the tomato attacks and try to stop them if possible. While hot on the trail, all of Mason Dixon’s team is killed except Lt. Wilbur Finletter, a saber wielding man in a jumpsuit and a deployed parachute (yes, he wears the parachute for the entire movie). In the end, it turns out that Jim Richardson is the mastermind behind the diabolical tomato plot and that he is essentially a “tomato whisperer.”  He hopes that when he stops the attack the surviving people will make him their leader. Richardson meets a disagreeable demise at the business end of the overeager Lt. Finletter’s saber. Naturally this unpleasantness happens just as Richardson was about to tell his secret for controlling the tomatoes.  Eventually the tomatoes are stopped by Mason Dixon’s quick thinking, and the aid of an awful pop song called “Puberty Love”. It had been many years since I’d seen the movie and my memory didn’t serve justice to this bizarre and twisted plot.

Press Secretary Jim Richardson’s journey is one of the more bizarre, yet amusing portions of this movie. His quest begins with a conversation with the President (who is endlessly signing his name on pieces of paper with different pens). Richardson then travels to San Francisco, which is dubbed New York, to recruit the help of a Madison Avenue ad executive.  The exec bursts into a musical number halfway through their interview. The ad campaign they come up with is so ridiculous that it would be unbelievable, except that I’ve seen some really bad commercials in my time.

The best part of Attack of the Killer Tomatoes! is all the little details. Scrolling ads appear on the screen from time to time.  Near the end, the ad type is interrupted by a caps locked plea for help as the typist is apparently eaten by a tomato.  I had to rewind the movie to watch the actual scene, since I was paying attention to the ad the first time.

At one point in the movie there is a Congressional Committee meeting in which all of the congressmen are named after former US presidents such as Polk and Fillmore.  For screen writing this terrible (and it really is) the puns and innuendos are amazingly clever. My absolutely favorite scene involves a briefing in a room that is far too small for the number of people who are in it. People are forced to crawl over each other and the table in order to get to their seats or to get up in front of the group to speak. There is also a Japanese scientist who is dubbed very badly, very intentionally.

Aside from the main plot, there are some other great moments throughout the movie. There is a very convincing helicopter crash in the opening scenes of the movie that I love (Turns out it was actually a real crash, so that explains why it’s so convincing.). The oversized tomatoes actually look pretty good. They are smooth and shiny just like real tomatoes, just much larger. Also, I love the little grumbling sounds that the tomatoes make as they go on their killing spree.

A surprisingly realistic tomato… except for its size, of course.

Of course Mason Dixon has his obligatory love interest, in the form of reporter Lois Fairchild. Lois’ contributions to the movie are limited, though she does have a couple of amusing moments. In her introductory scene, she says hello to a passerby named Clark with a red cape sticking out from under his coat; and later the movie wraps with a warped version of a stereotypical love scene.

Once the plot devolves, the movie becomes a little difficult to follow. May of the scenes seem to have little relation to the ones that came before and even less to the ones that come after. The movie eventually breaks down into a random group of weirdos stomping on tomatoes in the parking lot of San Diego Stadium.

This is not an uncommon problem for B movies. They often start with a great premise and are able to maintain in for forty five minutes or so, but they then need to fill another 30-45 minutes with scenes that often feel made up on the spot and are not at all in line with the rest of the movie. Attack of the Killer Tomatoes! ranks as one of my top favorite B movies of all times. Not only was it a good movie, but it has spawned several sequels, including one with a very young George Clooney (a review for another day), and a 90’s cartoon series. A definite watch for any fan of B movies. 4 Death Stars.

Tagged as Attack of the killer tomatoes, B Movie