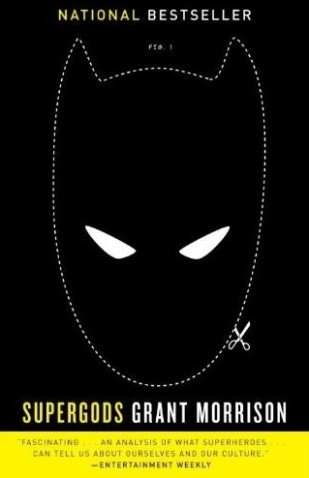 Last year’s New York Comic Con got me much more interested in the history of comics.  The second book I’ve read in my pursuit of comic book knowledge is Grant Morrison’s Supergods.  I was already interested knowing that Grant Morrison had written it but when a friend of mine recommended it, I decided to take the plunge.  I don’t always enjoy a Morrison book, but there is no arguing that he is one of the biggest and most influential names in comics right now.  I expected an insightful discussion of comic characters with some of his personal experiences interspersed throughout the book.  What I got was far weirder, far more personal information than I had bargained for.

The book starts off with several chapters dedicated to Golden Age superheroes.  Morrison’s analysis of the beginnings of classic heroes like Superman and Batman was both insightful and enlightening.  He presented these well-known characters in ways I had never thought of them before and made me reevaluate how I saw them.  My favorite of these early chapters dealt mostly with Superman though the 1950’s, after the establishment of the draconian censorship rules of the Comic Code when the plot limitations made writers come up with some very whacky stuff.  Morrison’s description of the off-the-wall adventures of the Man of Steel is quite a bit of fun.  Personally, I’ve never been much of a Superman fan, but this made me want to read some of those old stories.  I was so captivated by these opening chapters I could hardly put the book down.

As Morrison got to the comics of the 60’s and 70’s, he began to incorporate his personal experiences in comics and explain how he got his start in the industry.  This was all pretty interesting and it fit well with the general theme of the book (on occasion he begins to drift off topic, but even then it’s still interesting and at least tangentially related).  In these chapters, Morrison begins talk about some of his favorite of the more esoteric, less well known comics.  The comics he experienced are not the same ones that I enjoyed, although to be fair, I’m an American who grew up in the 90’s and he is a Scot and about 25 years my senior.  I am certain, however, that some of his references would be lost even on many of his Scottish peers.

For me, the wheels really started coming off this ride when Morrison began to talk about his exploration into magic.  That’s right, magic.  While I honestly have no issue with whatever the man chooses to believe, and I was aware that the book was partly an autobiography, I was not prepared for this level of weird.  I felt that it really detracted from the comic history in the book and that both subjects would have been better served by being separated into freestanding volumes.  If Morrison had written an autobiography and included every odd thing from Supergods and anything else he felt like covering, I would still probably have read it.  Grant Morrison is a fascinating man with a real gift for his chosen craft and I would be interested to see what insights could be gleaned from his life experiences, but I would prefer it in a book dedicated to his own personal stories.

This book is filled with comic book history and explores the use of archetypes within our society. It is not, however, a book I would recommend to someone with only a passing interest in comic history or even the average comic fan. Morrison delivers an insightful look at our modern culture through popular art and an interesting depiction of his own person journey to comic book legend, but the mixture of these two often disparate themes tends to dilute the impact of both.